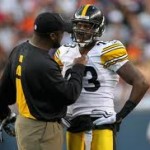 Out of the Steelers 17 unrestricted free agents, several won’t be back, and few are a priority for the team who don’t plan to resign notable veterans Max Starks and Casey Hampton, and expect Mike Wallace and Ramon Foster to sign bigger deals elsewhere.
The Steelers today are meeting with WR Steve Breaston at their team facility and there continues to be a sense that the Steelers get a deal done with Breaston at some point for the sole reason that there’s really not a market out there for the 29 year old receiver. However, the Steelers are only willing to offer the league minimum and they have felt Breaston wants more money than they are willing to offer, so it’s very possible things fall through.
Meanwhile, free agency is 13 days away and here’s some buzz in Steelers circles of four players considered to have good odds of being resigned:
ILB Larry Foote – The Steelers have made it known to Foote that they would like him back and both sides expect to finalize a contract at somepoint in March. Preliminary discussions are already ongoing and look for Foote to get a one year contract in the range of $1.5 million at the end of the day. Don’t be surprised if the Steelers starting four linebackers are the same from last season | Odds of Resigning: 90% |
QB Charlie Batch – All indications are the Steelers plan to bring Batch back to be one of Ben Roethlisberger’s two backups. The Steelers would like to draft or bring in a young quarterback and let him learn the ropes from Batch. | Odds of Resigning: 75%
OL Doug Legursky – No discussions are on-going yet with Legursky’s agent David Rich but the Steelers would like to bring Legursky back at a cheap price for needed depth at center and guard. Legursky seeks a two year deal and is interested in returning, and there’s not a lot of expectations that he will be coveted for a starting job elsewhere, but keep an eye on Arizona as Bruce Arians was a big fan of Legursky during his time as offensive coordinator. Legursky made $1.25 million last season. | Odds of resigning: 60 Percent
CB Keenan Lewis – The Steelers have a value on Lewis that they won’t bend on and will let Lewis test free agency similar to what they did in March 2010 with Ryan Clark. Once Lewis see’s what’s out there, the Steelers will make their move to resign Lewis and there is a strong mutual interest from both sides as Lewis wants to stay. Lewis emerged as the Steelers best cover corner in 2012 but a deep cornerback UFA class and Lewis’ lack of playmaking ability is expected to keep him in the Steelers price range. The value the Steelers are said to have on Lewis is a four year deal in the $17-$20 million range. Lewis won’t be getting Ike Taylor money from the Steelers but resigning him is important despite the emergence of Cortez Allen as Taylor turns 33 in May. | Odds of resigning: 55 percent
Other: S Will Allen – Allen is another strong candidate of returning next season. The Steelers have no depth behind Ryan Clark and Troy Polamalu, and Allen is a player head coach Mike Tomlin has always been a fan of.