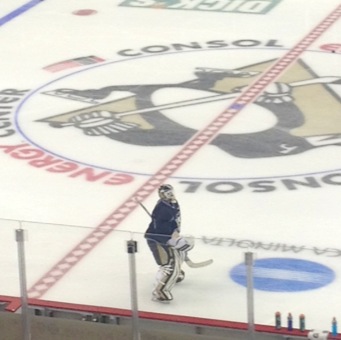 GAME 5 MORNING SKATE BUZZ
In a game not short of storylines, the Penguins look to retake control of the series tonight by turning to goaltender Tomas Vokoun.
Vokoun tonight makes his first post-season start since the 2007 post-season. Vokoun is 3-8-0 with a 2.47 GAA and .922 save percentage all-time in the playoffs but was 3-0 against the Islanders in the regular season with a 0.90 GAA and .970 save percentage. For his career against NYI, Vokoun is 17-7-1 with a 1.95 GAA and .937 save percentage and 5 shutouts.
But, will Vokoun be the only lineup change for a Penguins team that has been outplayed the last three games in a number of areas?
It appears we will see two lineup changes upfront and possibly one surprising change on the blueline.
Among the changes this morning is the Penguins going with a 4th line of Craig Adams – Joe Vitale and Tyler Kennedy. If Kennedy and Vitale play, as expected, it will be the first action for them in the playoffs.
Kennedy is also working extensively on the second power play unit with Jussi Jokinen seeing no power play time after being an extra during line rushes. Jokinen is pointless in his last three games with 1 shot on goal.
Meanwhile, on the blueline, Simon Despres is paired with Kris Letang as the No. 2 pairing. Mark Eaton had an awful game vs the Islanders in Game 4, playing under 11 minutes.
LINES
Chris Kunitz – Sidney Crosby – Pascal Dupuis
James Neal – Evgeni Malkin – Jarome Iginla
Brenden Morrow – Brandon Sutter – Matt Cooke
Craig Adams – Joe Vitale – Tyler Kennedy
Extras: Tanner Glass – Jussi Jokinen – Beau Bennett
DEFENSEMEN
Brooks Orpik – Paul Martin
Simon Despres – Kris Letang
Douglas Murray – Matt Niskanen
Extra: Mark Eaton – Deryk Engelland