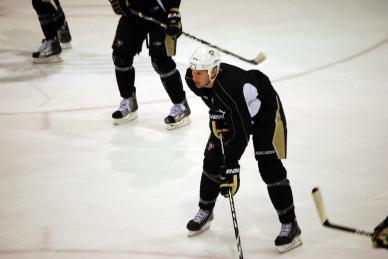 Morning skate buzz
Forwards Tyler Kennedy and Eric Godard will not play tonight as the Pittsburgh Penguins (33-20-1-67pts) host the surging Ottawa Senators (29-21-4-62pts). Godard will be sidelined for up to 4-6 weeks, likely longer, head coach Dan Bylsma announced today, following the Penguins morning skate.
Meanwhile, Kennedy re-aggravated a nagging lower body injury, sources tell me. Kennedy is day-to-day and it doesn’t appear he will miss much action. Kennedy and Godard will join Alex Goligoski on the sidelines tonight.
Like Kennedy, Goligoski’s injury is not serious and is only expected to miss a few games.
Max Talbot will return to the lineup after missing three games. Talbot will center the 4th line, while Craig Adams will remain on the third line with Jordan Staal and Matt Cooke. Look for Chris Conner to also see time with Staal and Cooke.
Pittsburgh has recalled forward Nick Johnson once again this morning. Johnson and Chris Conner will both be in the lineup tonight.Johnson will appear in his 4th straight game on Evgeni Malkin’s line. Conner is coming off a two goal game against the Rangers Monday night.
More Senators/Penguins pre-game buzz……
Ottawa comes into tonight’s looking to tie a franchise record for their 8th straight win. If the playoffs started today, Pittsburgh and Ottawa would meet in the first round for the 3rd time in 4 years.
Dan Bylsma talked yesterday how the Senators are breathing down the Penguins neck in a race for the 4th seed in the playoffs.
Both teams, however, are right in the mix for first place in their respective divisions. Pittsburgh is only 3 points behind division leader New Jersey, while the Senators are 7 points behind division leader Buffalo. Very important game for both teams tonight.
Senators Goaltender Brian Elliot has won five straight decisions but the return of Daniel Alfredsson has also fueled the Senators second half surge.
Alfredsson suffered a separated shoulder in the Senators last meeting with Pittsburgh on December 23rd on a hit by Craig Adams. Adams will be a targeted player tonight by the Senators.

The Penguins announced the signing of Wilkes Barre forward Joe Vitale. Vitale, 24, is a depth signing for the Penguins farm club.
The deal is a two-year/two-way contract.
Vitale will make $550,000 in the NHL, $83,500 in the AHL.
Vitale, originally selected by Pittsburgh in the seventh round (195th overall) of the 2005 NHL Entry Draft, is in the midst of his first full year with Wilkes-Barre/Scranton. In 41 games this season for WBS, Vitale has four goals and 19 points. His 19 points lead all WBS rookies.
Vitale, 24, joined WBS at the tail end of last season. He posted four points (2G-2A) in the team’s final five regular-season games, and saw action in all 12 postseason games.
Vitale (5-11, 205 pounds) played four collegiate seasons at Northeastern University of Hockey East. In 143 career games, Vitale totaled 34 goals, 60 assists and 94 points. The St. Louis, Missouri native set career highs in goals (12), assists (23) and points (35) during his junior season in 2007-08. Vitale was named Hockey East’s Best Defensive Forward following his senior campaign