Morning Skate: Gonchar not on the ice 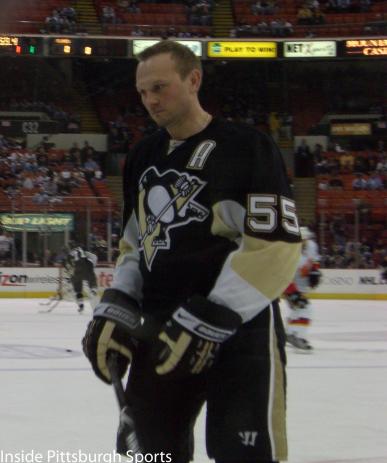 Morning Skate Update
The Penguins just took the ice as they prepare to close out the Washington Capitals tonight.
Defenseman Sergei Gonchar is not on the ice this morning.
Updates appear at the bottom of the page
10:41 a.m. – It appears by the current lines in the skate that
the Penguins will go with the same lineup for tonight’s game.
Current Lines
Kunitz – Crosby – Guerin
Fedotenko – Malkin – Talbot
Cooke – Staal – Kennedy
Adams -Crosby – Satan
Extras: Dupuis – Sykora – Godard are skating as their own line, so it appears the Penguins will dress seven defensemen again.

10:56 a.m. – Brashear to return to the lineup?
There is a lot of buzz going around the arena as Donald Brashear is eligible to return to the lineup tonight. The Capitals take the ice at 11:30 a.m. If Brashear returns to the lineup, the Penguins will likely not alter their lineup.
Bruce Boudreau met with the media and would neither confirm nor deny that Brashear will be in the lineup. Said it will be a game time decision.
11:13 a.m. – Morning skate has concluded, Penguins had a strong workout and they look determined to close out the Capitals tonight.