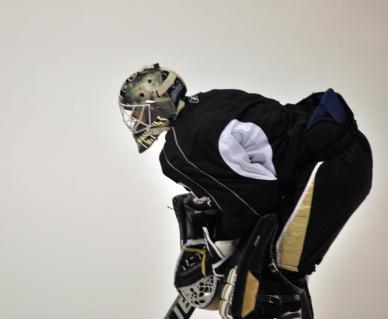 New York Rangers (26-27-7-59pts) @ Pittsburgh Penguins (36-22-2-74pts)
With the trade freeze looming, all players were accounted for this morning as the Penguins went through a 35 minute skate as the team prepares for the New York Rangers tonight.
Pittsburgh will have one lineup change as Brent Johnson will start in goal for Pittsburgh. Marc Andre Fleury will get the night off.
Pittsburgh is 4-0 against New York this season and are 2-0 at home. They could be the final meeting at Mellon Arena between the Rangers and Penguins.
Meanwhile, Rangers star forward Marian Gaborik participated in the Rangers morning skate. He is expected to be a game time decision after warmups tonight.
If Gaborik is able to go, Pittsburgh intends to match up the D-pairing of….
Kris Letang and Brooks Orpik against New York’s top line.
Pittsburgh will go with the same four lines with Jordan Staal expected to see time on the third and second line.
Kunitz – Crosby – Guerin
Fedotenko – Malkin – Dupuis
Cooke – Staal – Kennedy
Rupp – Letestu – Adams