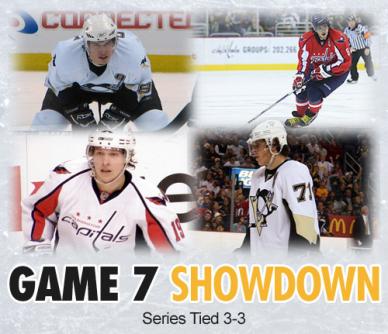 The NHL got its dream matchup between the Washington Capitals and the Pittsburgh Penguins in the Eastern Conference Semi-Finals and the NHL got its dream series after David Steckel scored 6:22 into overtime to force a game 7 in Washington, Wednesday night. With the series tied at 3-3, momentum has shifted to the Capitals.
Will the Capitals hold serve at home, or will Sidney Crosby and the Pittsburgh Penguins advance to their second consecutive Eastern Conference Finals?
Game 7 Preview

Pittsburgh – Offense
Sidney Crosby has been phenomenal against the Capitals, establishing himself as the games most complete player. Crosby has matched the hype and has 6 goals in the series matching his total for the entire 2008 playoffs.
Evgeni Malkin has had his moments putting on a dominant performance in game 3 and scoring the OT winner in game 5. Elite players elevate their play in key situations. Crosby and Malkin will be counted on to play at a super star level in game 7.
For Pittsburgh, what fueled their victories in games 4 & 5, was secondary scoring. Ruslan Fedotenko, Jordan Staal, Matt Cooke, and Max Talbot all found the back of the net. Whichever team gets the secondary scoring tonight will prevail.
The Penguins hold a significant advantage in shots, outshooting the Capitals 226 – 159 through the first 6 games of the series. After clogging the middle and keeping the Rangers to the outside in their first round series, the Capitals have not had any success in limiting the Penguins ability to get pucks on the net. That will likely continue tonight.
5-on-5 the Penguins have been the better team and they have to get more traffic in front of Simeon Varlamov who has been the difference maker in the series.

Washington – Offense
The Capitals do not get a lot of shots to the net but they pick their spots and are similar to the talented Penguins teams of the early to mid 1990’s.
Like Sidney Crosby, Alexander Ovechkin has matched the hype and has seven goals in the series. Ovechkin is among one of the most unique players in the history of the game and after keeping Ovechkin in check for games 3 & 4, Ovechkin has combined for 6 points in the past two games.
Like Pittsburgh, secondary scoring has been the key for the Washington Capitals in their three victories. David Steckel, Tomas Fleischmann and Brooks Laich have come up with big goals in key situations. Secondary scoring will be a key factor for the Capitals in game 7.
Center Niklas Backstrom has had a very good series to give Alexander Ovechkin some help upfront, but  in game 6 the Capitals got strong performances from Viktor Kozlov (2 goals) and Alexander Semin (1 goal).
Both players were non-existent in the series until game 6. The Capitals make teams pay off of mistakes, turnovers and the Penguins must limit their defensive breakdowns.

Pittsburgh – Defense
The Penguins will get a much needed boost on the blueline as Sergei Gonchar will likely play in game 7 after missing the past two games. Gonchar who is not 100%, will likely be used in a specialist role which would lead to Alex Goligoski being a healthy scratch and the Penguins dressing 7 defensemen. Gonchar skated at today’s morning skate and his skating was much improved from Tuesday’s skate.
The Capitals create a lot of their offense through the neutral zone. Pittsburgh has to maintain close gap control and be aggressive at the blueline with talented forwards Alexander Ovechkin, Niklas Backstrom and Alexander Semin.
Limiting their defensive breakdowns will be the key for the Penguins having success and keeping the Capitals off the scoreboard.

Washington – Defense
The Capitals lack mobility and toughness on their blueline and that has been evident against the Penguins. The Capitals are very vulnerable to the outside and they have not been able to match the Penguins speed upfront
For the Capitals, they are still waiting for defenseman Mike Green find his game. Green has struggled offensively and in the defensive zone, he is over pursuing. Pittsburgh has made him play defense which is not his strength.

Pittsburgh – Goaltending
Coming into the series, it was widely believed that the Penguins held a significant advantage in goal. Thus far, that hasn’t been the truth as Penguins goaltender Marc Andre Fleury has been outplayed by rookie goaltender Simeon Varlamov.
Fleury who was phenomenal against the Flyers in their first round series, has been inconsistent against the Capitals. The key for the Penguins winning game 7 is Fleury playing at the level he did against Philadelphia. If he doesn’t, the Penguins will be planning their vacation tonight.

Washington – Goaltending
Simeon Varlamov has been the surprise of the playoffs and has drawn considerable praise from the Penguins as the Penguins have outshot the Capitals 226-159.
Rob Scuderi had this to say following Game 6 about Varlamov’s performanice…. “What can you say? Varlamov is unbelievable right now. I think he’s played well the entire series. It’s Game 7, so I hope we come with our best effort. I think we’ve played well the entire series. He’s due, we want to make sure he doesn’t steal an entire series from us.”
The difference between Fleury and Varlamov has been Varlamov’s ability to make key saves at key situations. For Pittsburgh, they have to get traffic in front of Varlamov. Whichever team gets the better goaltending will win tonight.

Pittsburgh keys to victory
1. Convert on Power Play chances – The Penguins scored two power play goals in game 6 but they failed to convert when they were awarded a power play with 2:03 remaining in the game. They have missed that killer instinct they had last season.
Washington has been undisciplined all series and power play opportunities will be on the table for Pittsburgh in game 7.
2. Get secondary scoring help – Secondary scoring has been the key for both teams in this series. If Pittsburgh can continue to get strong contributions from players like Max Talbot and Ruslan Fedotenko who has three goals in the series, it could be a good night for the Penguins. Some offensive production from Chris Kunitz wouldn’t hurt.
3. Limit defensive breakdowns – The Capitals — capitalize off of mistakes and turnovers. The Penguins must limit their mistakes and play a strong defensive game. One area of concern has been the Penguins defensive breakdowns where positioning has been a problem.
4. Crosby, Malkin must shine – Sidney Crosby and Evgeni Malkin are regarded as two of the games top players and game 7’s are where star players elevate their performance. This is the difference between a borderline star player in Joe Thornton and between a super star like Sidney Crosby. The pressure will be on both players.
5. Fleury must elevate his performance – There’s no way around it but Marc Andre Fleury is the key for the Penguins tonight. He has yet to steal a game this series and the Penguins are counting on him to do so tonight.

Washington keys to victory
1. “Be Discipline” – The Washington Capitals have been undisciplined throughout this series. It almost ended their season in game 6 as David Steckel was called for a slashing penalty with 2:03 remaining in the third period.
2. Offensive help for Ovechkin – Alexander Ovechkin has been sensational in the series and other than Niklas Backstrom, Ovechkin has got minimal help from top 6 forwards Alexander Semin and Viktor Kozlov. If Kozlov and Semin play at the level they did in game 6, it could be a good night for the Capitals
3. Mike Green – After scoring 31 goals in the regular season, Mike Green has been a disappointment through the first two rounds of the playoffs. Green is a difference maker on the blueline and the Capitals need him to play at the level that he can.
4. Secondary Scoring – Secondary scoring is very important to which team wins tonight. The Capitals have got strong contributions from players like David Steckel and they will need the same again in game 7.
5. Varlamov will have to steal another game – The Penguins have outplayed the Capitals 5-on-5 and the shots are going to keep coming as the Capitals have not been able to limit the Penguins attack. Varlamov will have to be the difference maker in game 7.

Outlook
In the most hyped second round series of all time, this series has had a little bit of everything and it’s fitting that the series has gone seven games.
Momentum has shifted to the Washington Capitals as they return home for game 7. While the Capitals have momentum, this is not the kind of situation going on with the Bruins-Hurricanes series where the Bruins return home for game 7 after dominating the past two games.
Pittsburgh has been the better team throughout the series and has won 3 out of the last four games. The Penguins are a experienced and confident team right now and believe that if they continue to play at the level they are, they will come out on the winning side.
For the Capitals, what they have going for them is that they have yet to play at the level that they can and the series is still tied at 3-3.
Both teams are evenly matched and will the Penguins be able to get to Varlamov?  Many wish this series could go nine games and it can’t. Penguins will advance —-