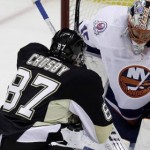 Islanders (8-11-3, 19 pts) @ Penguins (14-8-0, 28 pts)
Coming off their best performance of the season, the Penguins look to extend their winning streak to three games tonight vs the New York Islanders.
It’s an Islanders team to no surprise can’t keep the puck out of the net. New York has given up 73 goals in 22 games and have major issues in goal. Who didn’t see that coming. By comparison, the Penguins have surrendered just 48 goals this season, the third best mark in the National Hockey League.
The Islanders, though, find ways to get the Penguins out of their element and that was again on display in the Islanders 4-3 win over the Penguins on Oct. 25th. Right now New York is a bad hockey team and sorely lacking on the blueline and in goal but the Penguins seem to bring out the best in the Islanders when these two teams meet.
SOME LINEUP NOTES FOR TONIGHT’S MATCHUP
— Jeff Zatkoff will make his first start in nearly three weeks. Marc Andre Fleury goes tomorrow night in Montreal. Zatkoff last played November 2nd, posting a 3-0 shutout win against the Blue Jackets. This will be his second start against the Islanders this season and fourth overall this season. Zatkoff played well against the Islanders in his previous meeting but the Penguins were plagued with multiple defensive breakdowns in the third period leading to the loss.
— There will be no changes upfront for the Penguins as they will roll the same four lines. Brian Gibbons will appear in his third straight game.
— Kris Letang has been removed from the first power play unit. Paul Martin will man the point with Evgeni Malkin up high and Sidney Crosby, James Neal and Chris Kunitz down low.