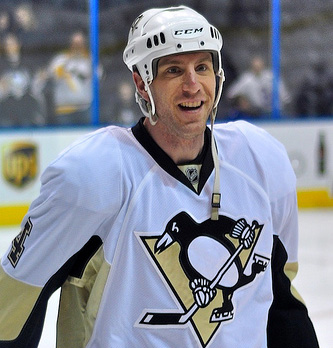 LATEST PENS BUZZ
When the Penguins signed Rob Scuderi to a four year, $13.5 million contract on July 5, 2013, Penguins GM Ray Shero called it a chance for a do-over. “It was a mistake to let {Rob} Scuderi go on my part,” Shero said last July. “To have the chance at a do-over and bring Rob back, I think that’s a good day for us.”
I’m told Shero and the coaching staff felt coming into this season that Scuderi still had two years in him as a top-4 defenseman with the likelihood of him being more of a No. 3/PK specialist type guy in the final years of his deal.
The prospect of paying a slow footed defenseman $3.375 million per season into his late 30’s wasn’t enough to deter the Penguins from not signing Scuderi due to the expectation that Scuderi could still play a top-2 pairing/shutdown role for at least a year or two.
This was a “Now” signing in the hopes of getting at least two impact seasons from Scuderi and taking what you get from Scuderi the final year or two of his deal. The Penguins weren’t worried about what type of defenseman he would be in three to four years.
What’s problematic is that Scuderi’s the defenseman now that the Penguins anticipated he wouldn’t be until year three or four of the deal…..On the downside of his career.
The Scuderi signing when you look at the present and future was a miscalculation by Shero who sources say was the driving force to signing Scuderi once he got word from the agent at the draft that Scuderi eyed a return to the Eastern Conference. The pursuit of Scuderi was aggressively made by Shero despite some members of the organization, notably those among the pro scouting staff being lukewarm about the fit as the signs were there last year in Los Angeles that Scuderi was regressing as a player.
Scuderi, 35, is a great guy in the room with great leadership qualities, still adds something to the penalty kill, but the reality is that he’s a player on the decline who is only going to keep declining, despite the positive spin the team is making regarding his play.
“Rob plays a fairly unassuming defense in style he plays in what he does on the ice,” Penguins head coach Dan Bylsma said this morning. “Guy who defends, always thinking defense, PK is a big part of that. Rob I think probably played some of his best hockey for us in the playoffs and this year,” Bylsma said. “Columbus games 5, 6, games 2-4 in this series, {he} has played Rob Scuderi type hockey for us.”
— If the Rangers come back and win this series, will Dan Bylsma be in serious jeopardy of losing his job? The argument would surely be there that it’s time for another “voice” but someone else would likely be the scape goat as It sure doesn’t sound like he is in any danger or coaching for his job this series. I’m hearing management feels Bylsma and the coaching staff have done a phenomenal job this post-season from an adjustment standpoint and other aspects. I’m told one feeling inside the organization is that who better is really out there? That not only goes for Bylsma but also for Marc Andre Fleury at the goaltending position.
— Impending RFA Brandon Sutter has shined in the post-season with strong two-way play, looking like the player Penguins management envisioned getting two years ago, and a year away from unrestricted free agency, it’s going to be quite a situation to watch on how things play out regarding his long-term future in Pittsburgh this summer. A feeling among executives is that things could get “ugly” with Sutter’s reps at Newport Sports who covet a deal of $4 million+ per season for Sutter and due to the Ryan Kesler trade talk at the deadline, Sutter might be lukewarm about doing a long-term deal with the Penguins.
“Could certainly see a scenario where Pittsburgh gets backed into a corner and has to move him,” an Eastern Conference executive said. “Just the way this business works. Any time a players name is out there {like Sutter’s was} feelings get hurt…..Wont be a shortage of suitors.”
— A stunning stat for Sidney Crosby this post-season is that he has just 5 even strength points in 11 playoff games, tied for 32nd in the NHL. Evgeni Malkin who is playing lights out has 11 even strength points.