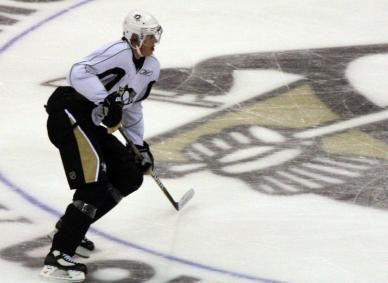 The Pittsburgh Penguins had an off-day on Monday but the front office and coaching staff conducted extensive organization meetings in preparations for the Penguins first round series with the Ottawa Senators.
The Penguins will practice on Tuesday at 11:00 a.m. to begin their first on-ice preparations for the Senators.
Despite an inconsistent end to the season, optimism is brewing throughout the organization as many feel Evgeni Malkin and Sergei Gonchar are healthy for the first time in months and starting to show signs of picking up their games up as the Penguins head into the playoffs.
The talk coming out of Monday’s meetings is that based on evaluations, Matt Cooke (head injury), Brooks Orpik (leg) and Chris Kunitz (shoulder) will be available to play in game 1 of the quarterfinals.
A focus on Monday’s meetings were believed to center on the Penguins lineup for game 1 in what will be a difficult decision for the coaching staff.
The buzz on Monday is that early signs point towards Max Talbot being the odd-man out in game 1, with Ruslan Fedotenko likely being a floater throughout the lineup.
With Tyler Kennedy re-gaining a spot on the third line, he is no longer under consideration to sit.
The presence of Jarkko Ruutu and Chris Neil in the lineup for Ottawa favors Michael Rupp keeping a spot in the lineup.
The coaching staff has not shown a willingness to sit Craig Adams which won’t change Wednesday night, and puts the Talbot dilemma back at the forefront.
Based on what I’m hearing, it’s expected that Pittsburgh will go with a top two lines of Kunitz – Crosby – Dupuis, Ponikarovsky – Malkin – Guerin, and Fedotenko getting a shift here and there on one of the top two lines.
Similar to how Bylsma used Fedotenko against the Atlanta Thrashers at home on April 3rd, prior to Chris Kunitz getting injured.
Inside The Numbers
Goal scoring from the Penguins top two line wingers over the past 15-20 games has been bleak to say the least.
*Pascal Dupuis who in the eyes of the coaching staff has become a lock on Sidney Crosby’s line has two goals in his last 16 games.
*Ruslan Fedotenko who ended the regular season with a team-worst minus-17 rating, has two goals in his last 19 games.
*Alexei Ponikarovsky, the Penguins marquee acquisition at the March NHL trade has two goals in 16 games with the Penguins.
*Bill Guerin heads into the playoffs with 4 goals in his last 20 games.
*Chris Kunitz who has a nagging shoulder injury, has been the lone bright spot, scoring 7 goals in his last 20 games.