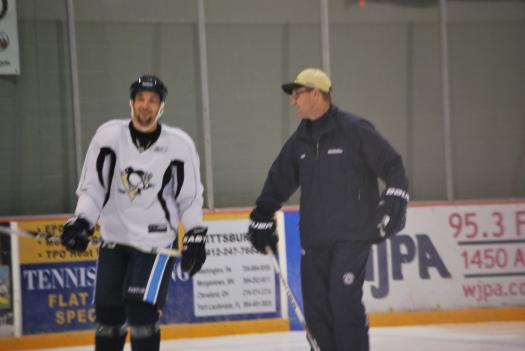 Deryk Engelland’s fight with Colton Orr last night is not only the talk of the town but the talk of the NHL (Video can be seen here). Engelland pummelled Colton Orr with a hard right that sent Orr to the ground and out of the game.
Engelland called it a “lucky punch” today but said fighting Colton Orr who is regarded as one of the NHL’s top heavyweights is nothing new to him.
Engelland said that the two had plenty of battles in juniors and in yesterday’s game, Engelland was the one who approached Orr about dropping the gloves.
Orr said “no” at first then skated down the ice and told Engelland he would go. With the Penguins trailing 3-2 in the second period, Engelland felt it was a good time to go with one of the league’s top heavyweights in an attempt to spark his hockey club.
“Yeah I know definitely, he’s {Colton Orr} established around the league for the last five or six years, one of the top heavyweights in the league, ” Engelland said. “Just have to be fortunate to get a lucky punch in like that. But I’m sure he’ll be looking forward to it again next game.
“I haven’t really seen anyone around town or anything but that’s part of my job, be smart for the team, get guys going and I thought it was a good time to do it, ” Engelland said on being the buzz of the town.
Following today’s practice Dan Bylsma talked about what Engelland brings to the table.
“You have to bring your game to the table, ” Bylsma said. Everyone has to do that and Deryk has proved what he can be….. He’s been physical in the games he played against other teams’ skill guys. He was hitting Kovalchuk and Parise in New Jersey. And he added that aspect to our game last night, in a game where as a first year guy, he took it upon himself to give our team a spark.
“He did it with a guy who’s a pretty tough customer. You have to wonder why he’s fighting him a little bit. I’ve seen Deryk and he’s really tough and and that definitely added a spark to our bench and it got the crowd back into it.”

Veteran defenseman Andrew Hutchinson had 13:55 of ice time and was a minus-2 Wednesday night against the Toronto Maple Leafs, appearing in his first game in a Penguins uniform.
Despite being a minus-2 against Toronto, those I spoke with today felt Hutchinson fared pretty well and stood out in the transition game which is where Hutchinson can help the Penguins.
“Just tried to keep it simple and play my game, ” Hutchinson said. “Felt me and Deryk played pretty well together moving puck and unfortunately didn’t get the result we wanted in getting the first win at the Consol.”
Hutchinson on the importance of the transition game.
“Me and Deryk are just trying to get the puck up and out of our zone as fast as possible to spend the least amount of time there. Making the first passes is so important in today’s game. I think we did a good job and that was my focus in my first game.”
With Brooks Orpik out of the lineup, the Penguins are pressed to play two right handed defensemen together which most coaches try to stay away from if they can.
Hutchinson said today he is very comfortable playing the left side and it’s not a problem for him.
“No, I played there {left side} during training camp and last year, ” Hutchinson said. “I’m use to playing the left side and it’s a good spot for me.”

Bylsma on Comrie being scratched

Forward Mike Comrie had little to say about his benching, just saying that he has to play better. Head coach Dan Bylsma talked today about why Comrie was a healthy scratch.
“Mike is a guy who adds offensive ability and can play in different spots and he did do that to some degree, he could have three points right now if we hit an open net or it doesn’t clang off the post to a guy he passed to, ” Bylsma said.
“Just puck battles on both ends of the rink and being hard on the puck and being able to make those plays….everyone looks differently. Mike Comrie is not going to be Matt Cooke, but he has to be able to do that and be those things for the power play and for his linemates and do all those things on the rink both offensively and defensively. He got scratched in last night’s game but he will get another opportunity.”
Bylsma said the reason he played Eric Godard (3 shifts, 3:24 ICE TIME) was because of the need to have an enforcement type of player in the lineup.

“Zbynek Michalek has an upper-body injury,” Bylsma said. “It’s tough to estimate but two to four weeks on Z. Brooks is day-to-day. Arron Asham skated today….. He was out indefinitely and now it’s around two weeks.”

Sidney Crosby will be in the lineup tomorrow night and talked today about the Penguins early struggles.
“Nobody likes to lose but I think through the first four games, we’ve done some pretty good things and had some pretty good chances to score, ” Crosby said. “We still have things to improve on but there have been a lot of good things too. We can always look at other situations and scenarios.
I look back to last year….We were 9-1 but we didn’t really play that well. You still want to win obviously but that’s hockey sometimes. It doesn’t always seem fair but that’s the way it works.”
Crosby on creating chances: “I feel good, Crosby said. “There’s frustration that comes with not creating chances, and there’s frustration that comes when they seem not to go in. When you’re creating them, that’s a big part of it. As long as you keep doing that, they’re going to go in, and you’re going to get your bounces. But I feel good and I feel like I’m creating things out there. We’ve all done a pretty good job of creating chances, it’s just a matter of having it go in.”