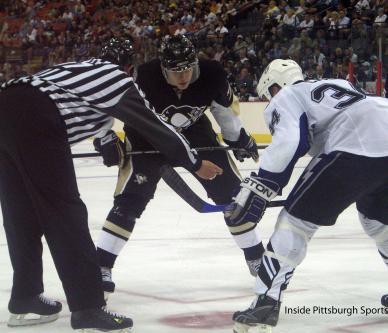 Focus turning towards getting Evgeni Malkin help?
In the midst of a five game losing streak and losses in six of seven games, the Penguins return home for a two game home stand before hitting the road for a five game road trip that includes a three game trip in Western Canada.
Penguins general manager Ray Shero is a patient GM, however, sources tell me management will evaluate the Penguins upcoming seven game stretch very closely as the team begins preparations towards making potential moves.
Management’s focus is quickly turning towards getting some help for Evgeni Malkin who is on pace for a career low 27 goals. The team is considering internal moves along with outside moves as the trade market is beginning to develop.
The prospect whose name that has been highly discussed in the organization is Luca Caputi. Caputi has made great progress in his second season but I’m told the organization remains torn on Caputi.
The growing consensus is that Ray Shero is among the group of members who don’t want to rush Caputi to the NHL. However, a full-time callup of Caputi at some point this month has not been totally ruled out.
The Olympic Trade freeze will run from Feb 12 – Feb 28.
Yeo will be released from hospital on Monday
Mike Yeo, 36, will be released from a Sunrise, Florida hospital early Monday morning and return home to Pittsburgh.
The Penguins may keep him away from the bench for a few more games. Yeo is believed to have suffered chest pains throughout the day on Saturday.