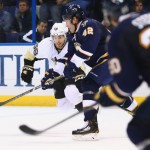 MORNING PENS BUZZ
— My biggest takeaway from the Penguins 2-1 loss to the St. Louis Blues Saturday night is how the Blues look like a serious Stanley Cup contender. Top to bottom a very deep team, play a great team structure and they have great size. I was also really impressed with the effectiveness of their fourth line. Unfortunately for the Blues they play in the Western Conference where they might be the third or fourth best team in the conference.
— Were the Penguins and Blues meet in the Cup Finals, it would not be a favorable matchup for the Penguins. The Blues can play a heavy game effectively against the Penguins style of play and it would be a series I’d favor the Blues. I would see them giving the Penguins the same type of problems Boston gave them last post-season.
— Following Bruins game few weeks back, I wrote about what an element a great two-way centerman like Patrice Bergeron adds who can get you 60-70 points while most importantly having the ability to shutdown a Sidney Crosby in a playoff series. There’s only a few of those special type of centermen out there and David Backes is one them. At 6-foot-3, 220-pounds he has more physicality and strength to his game than Bergeron and he made life miserable for Crosby who was pointless in the loss to St. Louis and Crosby had just 2 shots on goal. Crosby has now gone 7 games without a goal while linemate Pascal Dupuis has gone 11 games without a goal. Dupuis has just 2 assists in his last nine games.
— One complaint against the Penguins coaching staff, namely Dan Bylsma is that there’s an arrogance about him when it comes to matchups. Bylsma made no attempt to get Sidney Crosby away from Backes Saturday night.
— The type of goal Marc Andre Fleury gave up in the third period against the Blues in what was a pressure situation with the game tied 1-1 is why he’s getting no consideration for Team Canada. After the goal, I thought he responded well with a great save on Alex Steen to keep the game 2-1 but those type of fluke goals in pressure situations still follow him around.
— Penguin fans again got a good look of how positionally sound Blues netminder Jaroslav Halak is and if this guy hits the open market next summer, I believe the Penguins will take a very hard look at Halak, unless of course Marc Andre Fleury leads this team back to the Stanley Cup Finals. Penguins scouts hold Halak in very high regard and he made his name as a goaltender under Jacques Martin in Montreal. The rumblings have been out there for a while of the Penguins eventually becoming a player for Halak but a trade doesn’t seem likely this season as indications around the league are St. Louis won’t move him. The only shot will be if Halak hits the open market.