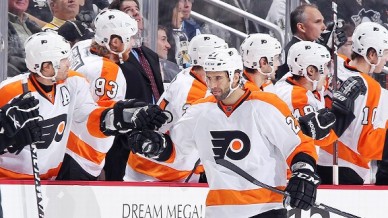 MORNING PENS BUZZ
The Penguins locked up home ice in the first round Thursday night, setting up a 4-5 playoff matchup with their cross-state rivals the Philadelphia Flyers.
Going into today’s practice at 11:30 a.m. at the Southpointe Iceoplex complex, the biggest pressing question yet for the Penguins isn’t that the Flyers are 5-0 all-time at Consol Energy Center and 4-1 against Pittsburgh this season yet, it’s whether the Penguins decide to treat Saturday’s game as a ramp up game for the playoffs or treat it like a meaningless game.
The right move is to treat it like a preseason game, rest some of their stars, and not play into the Flyers “bs” through the media this week.
POST-RANGERS THOUGHTS
— Maybe I’m in the minority on this but Tuesday’s game against Boston and last night’s game against New York, had the feel of a preseason at times. You never felt the Rangers or Bruins were trying to go all out in a meaningless game for them. âLetâs face it, we didnât have the same drive we would have if we had to win it, ” Rangers center Brad Richards said on last night’s game. âItâs definitely not the same, â Richards added.
However, that’s not been a bad thing for the Penguins going into the playoffs, and while it’s not like the Penguins couldn’t beat Boston or New York on any particular day, this week setting up as meaningless games for the opposition has been a good thing for the Penguins as they’ve worked their way out of a mini slump and for the first time in a while, they feel good about themselves defensively coming out of last night’s game.
— Word around the league for a while now has been that the Mario Lemieux statement to the NHL last February following the melee on Long Island rubbed several teams the wrong way and some read it as if the Penguins feel they do no wrong, leading to talk of the team being arrogant for a while now, prior to Tortorella’s tirade last night.
âTheyâre one of the most arrogant organizations in the league, ” Tortorella said. They whine about this all the time and look what happens. Theyâll whine about something else, wonât they, starting with their two [bleeping] stars.”
While Tortorella had a right to go off about Orpik and stick up for his team, it was a little surprising to see him go as far as he did and bring Crosby and Malkin into it. And, why did Malkin get thrown into the mix of being a whiner like Crosby. Aside from Craig Berube, you don’t hear any talk of Malkin being a whiner.
— The league is reviewing the Orpik hit but as of 10:00 a.m. this morning, no disciplinary action hearing has been scheduled, although it’s very early at this point. âIt was pretty gutless and dirty, â Rangers goaltender Marty Biron said about the hit. âIt crossed my mind to go all the way down towards Orpik after leaving the net on the delayed penalty. That guy is known for sticking his knee out and his elbow out. Itâs what heâs done his entire career. He will continue to do this unless someone can stop him with a suspension.â
— While the Penguins were strong overall defensively against the Rangers, Brian Strait was a mess defensively, and he’s somewhat of a concern in a playoff series with Philadelphia. Niskanen is no sure bet to be ready for Game 1. Word on Niskanen is that his shoulder injury is not serious but is one of those injuries where when he takes a hard hit, it leads to a lot of discomfort.