Morning Pens Buzz: One that got away; Malkin heating up; Bortuzzo deserves shot; Post-Game Tidbits 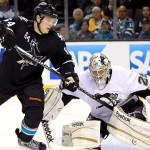 *PENS LET ONE GET AWAY: San Jose Sharks head coach Todd McLellan said it best following last night’s 4-3 Sharks shootout win…”We had no business winning that game after the first period, ” McLellan said
The Penguins playing for the first time in five days, came out flying and dictated the pace and the game in the first period jumping out to an early 2-0 lead behind goals from Deryk Engelland (24 seconds into the game) and Evgeni Malkin.
Pittsburgh outshot the Sharks 15-4 in the opening period and San Jose came out like a team that was coming off a six game road trip but they picked up their game in the second and third periods as Pittsburgh got away from theirs.
The Sharks came back to outshoot Pittsburgh 17-6 in the second period.
“We found a way to get back into it,” McLellan said.
The Penguins (8-3-3, 19pts) have now lost eight straight in San Jose and are now 0-8-1 in their last nine games at the Shark tank. The Penguins last won in San Jose on Oct. 22, 1997.
Despite blowing a 3-1 third period lead, getting a point in a Western Conference venue is always important. Pittsburgh is 14-4-5 against the West since 2010-2011. The Penguins came into the game 7-0-1 when leading after two periods.
“We got away from our game in the second and third, ” defenseman Deryk Engelland said.
* * * * * * * * * * * * * *
MALKIN HEATING UP Penguins center Evgeni Malkin is heating up and played his most dominant game of the season. Malkin was a force in the offensive zone, scoring twice and adding an assist. He has 6 points in his last three games.
From drop of the puck he had an extra jump in his step.
Malkin’s 2 goal game was his first multi-goal game since December 20, 2010, a span of 22 regular season games.
Malkin’s linemates James Neal and Steve Sullivan also had strong offensive nights. Neal who has a team leading 13 points on the season, had two assists in the game and Sullivan who’s scoreless through 14 games, also had a two assist night.
* * * * * * * * * * * * * *
BORTUZZO DESERVES SHOT AT NHL LEVEL: Ben Lovejoy will be sidelined for at least 4 to 6 weeks with a broken wrist. Next up on the organizational depth chart is Alexandre Picard.
However, the prospect who deserves a legitimate look at the NHL level is 2007 3rd round pick Robert Bortuzzo (6-4, 214).
One of the Penguins most under-rated prospects, Bortuzzo is a big physical defenseman with a nasty edge at times who’s a strong skater and good on the breakout.
His ability to clear the front of the net is something the Penguins current top-6 lacks at times.
The Penguins brass believes he’s NHL ready but certain situations have kept him from getting a look at the NHL level. He suffered a knee injury in the September rookie tournament and didn’t participate in training camp.
Back healthy and cleared to play, Bortuzzo has appeared in two games this season and is a +44 in his last 156 regular season games with the Baby Pens.
Tidbits
*Defenseman Deryk Engelland scored his first goal of the season and was a +3 in the game, giving him a +4 rating on the season.
*Paul Martin was a minus-3 in the game and now has a team worst minus-7 rating through 14 games.
*Pittsburgh struggled in the face-off circle in the loss. Joe Vitale won just 1 of 9 draws, Evgeni Malkin was 7 for 20 on draws and Richard Park was under 50%, winning 6 of 14 draws. Mark Letestu was the lone bright spot, winning 8 of 14 draws.
*James Neal led the Penguins with 8 shots on goal, increasing his team-leading shots on goal to 60 on the year.
*Marc Andre Fleury (7-2-1) made 34 saves in the loss.
*Pittsburgh did not have a power play opportunities for the first time since
Feb. 23, 2003, against the New Jersey Devils.