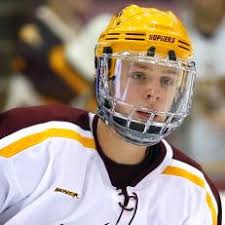 Reilly in process of cutting list down
Coveted defenseman Mike Reilly (Columbus Blue Jackets 2011 draft pick) met with nearly 1/3 of the NHL this week in Buffalo, nine teams in all, including the Pittsburgh Penguins.
The vibe surrounding Reilly hasn’t changed in that he’s destined to sign with the Chicago Blackhawks but the plan for Reilly and his reps at CAA Sports is to cut the list of nine teams down to three to four teams by early next week where the process will then center around towards making visits before July 1, a league source says.
The Penguins went into this process not really on Reilly’s radar but they made what they feel is a strong pitch and tried to sell Reilly on the fit in Mike Johnston’s system where the primary focus is on activating the ‘D’ off the rush.
Reilly a puck moving defenseman, has drawn comparisons to Nick Leddy from some in scouting circles.
One thing agents try to sell players like Reilly who is taking advantage of the situation where he’s basically a free agent (except that he has to sign an entry level contract) by not signing with the team that drafted him, is finding the best fit that will maximize his ability for his second contract. The second contract is always the goal here.
In addition to a fit, and while often impossible to predict, Reilly is looking for a stable coaching situation, a source says, another area that favors the Blackhawks, others in the mix like the Rangers, Oilers.
More Buzz
— WBS assistant coach Alain Nasreddine is likely to join the New Jersey Devils coaching staff as the Penguins are not planning to interview Nasreddine for the Wilkes Barre job because of the expectation that he’s following Hynes. Nasreddine will interview with the Devils on Monday. The Penguins can’t receive a compensatory pick for Nasreddine because they’ve reached the limit they can receive.
— The Penguins and the agent for Ian Cole (RFA) have had preliminary discussions on the potential term of a new deal. Numbers haven’t been discussed yet but the Penguins are high enough on Cole where they’re looking to buy a year or two of unrestricted free agency with both sides expected to start discussions on a 2-3 year deal.
— The Penguins have had no buy-out discussions yet with Steve Bartlett the agent for Rob Scuderi, a source says. The buy-out period begins on June 15.