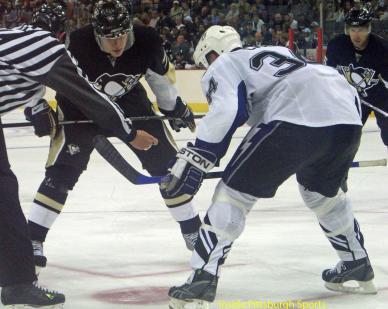 Calgary Flames (42-24-6-90) @ Pittsburgh Penguins (39-27-8-86)
The Penguins have made some line changes for tonight’s game.
Matt Cooke has been moved up to the second line and will play with Evgeni Malkin and Petr Sykora according to a source close to the team.
Penguins Lineup
Cooke – Malkin – Sykora
Kunitz – Crosby – Guerin
Fedotenko – Staal – Kennedy
Dupuis – Talbot – Godard
Despite skating with the second power play in practice yesterday, defenseman Philippe Boucher will be scratched. The coaching staff wants him to get a few more practices under his belt.
Defensemen
Orpik – Gonchar
Gill – Scuderi
Eaton – Letang
Marc Andre Fleury will start in goal