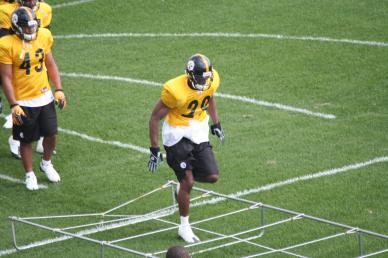 Safety Ryan Clark will not make a decision on his playing status in Denver until next week. Internally a decision will be made by Monday when the Steelers return to practice.
Steelers head coach Mike Tomlin has given his veterans the entire week off which is a first under Tomlin.
As for Ryan Clark, it is very unlikely that he plays against Denver, despite the notion that he hasn’t made a decision. Clark has a sickle-cell trait which was aggravated by the high altitude in Denver during the Steelers – Broncos contest on October 21, 2007.
Clark was hospitalized following the game and eventually had his spleen and gall bladder removed and lost more than 30 pounds. It took him nearly 3-to-4 months to recover.
Ryan Mundy is under strong consideration to start in place of Clark against Denver.
Mendenhall to remain primary ball carrier?
Rashard Mendenhall’s fumble in the 4th quarter against Minnesota will have no bearing on his status as the Steelers number 1 back. According to Mike Tomlin, Mendenhall will remain the Steelers starter, even though Willie Parker will be close to 100 percent following the bye week.
The Steelers have all intentions of keeping things status quo following the bye week. Mendenhall rushed for 69 yards on 10 carries against Minnesota.
Timmons expects to play against Denver
Lawrence Timmons wrote on his blog today that his ankle injury in “no big deal.”
According to Timmons, “It’s a Grade 1 sprain, not a big deal, and it’s the other ankle from the one I hurt earlier in the season. I should come back faster than I did from that high ankle sprain. I should be able to make it back for the Denver game, which will be Nov. 9 on Monday Night Football.”
Quick Hits
*Even though rookies and practice squad members are the only players who will be practicing this week, I’m told Limas Sweed is expected to stick around this week.
For Sweed’s credit, he is a very hard worker off the field and if he wants to get back on the active list, he’s going to have to put the extra time in on the practice field.
*The Steelers have been mum on the status of Travis Kirschke (calf). His injury is not serious though and according to a team insider, is regarded as a 1-2 week injury.
*The Steelers lack a true playmaker at cornerback. The team has high hopes for Keenan Lewis but he’s not close to contributing this season. Cornerback will be under consideration very early again in April’s draft like it was last year.