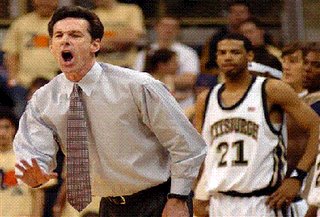 University of Pittsburgh head basketball coach Jamie Dixon is believed to be in discussions with Missouri and Arizona State for their head coaching vacancy’s. Dixon is either a idiot wanting to leave Pitt for those schools or he’s trying to get some bargaining power to get an extension and more money from Pitt. In my opinion Dixon doesn’t deserve a extension or more money at all. He hasn’t taken Pitt to the next level so why give him a extension. I still would like to see Dixon stay but if he would leave Pitt would have to make a strong run at bringing in John Calipari who has Pitt roots. Only time will tell.

The Pens gave a decent showing against a Stanley cup contender but what a lack of respect from Ottawa especially the cheap shot on Crosby in the third period. A lot of people have been ripping Andre Roy for a while now but he stands up for his young star as does Eric Cairns. Sergei Gonchar had a awful game. I like the powerplay breakout with Crosby bringing the puck up but once they get into the zone they need to move him around and put him down low. He’s most effective down low setting up teammates not firing slap shots from the point. The Penguins stand right now at 46 points and are only 5 pts behind the St. Louis Blues and Chicago Blackhawks. The race for the Phil Kessel and Erik Johnson sweepstakes is getting tight.

Quarterback Aaron Brooks has agreed to terms with the Oakland Raiders.
– my take: This is a great signing for the Raiders. Brooks is a big time talent who has underachieved and in Oakland could blossom into the quarterback everyone thought he was going to be

Wide receiver Keyshawn Johnson has turned down a 3 yr 3million a yr deal from the New York Giants and has now turned his attention to the Kansas City Chiefs. Ike Taylor of the Steelers is drawling interest around the league and the 49er’s , Cardnals, and Broncos and Jets are rumored to be in process of sending him a contract offer. If he would accept a offer from of any of those teams the Steelers would have one week to match any offer. The Miami Dolphins have turned their attention to Lavar Arrington after missing out on linebacker Julian Peterson. Arrington is believed seeking a deal similar to Petersons ( 7yr 54 million ). The Bengals are also seriously pursuing Arrington. Speaking of the Dolphins the gun slinger Tommy Gun Maddox is on the verge of reaching a deal with the dolphins to back up Daunte Culpepper.

Same old Buccos….
– The Pirates just never learned from their own mistakes. They’ve been saying all year this is the year there going to finish above five hundred, then they send down their best pitcher Sean Burnett this spring training because he is left handed. I dont care how many left handed pitchers they have. If their your best pitchers then put them in the lineup. This team will never turn the corner until we finally see the best 25 man roster they have in the organization. Other news Oliver Perez is rumored to have been the named the opening day starter.