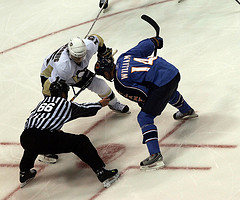 Zigomanis not signing with Pittsburgh?
Internet rumors have been buzzing that center Mike Zigomanis has re-signed with Pittsburgh after his name has all of a sudden appeared on the Penguins roster (official site)
Contract talks with Zigomanis broke off just days before July 1 as Zigomanis camp was highly surprised when the Penguins pulled their offer.
In fact, Kurt Overhardt, the agent for Mike Zigomanis was furious.
The Penguins signed Michael Rupp, a client of Allan Walsh, three hours into free agency to add even more depth to their 4th line, making a return for Zigomanis even less likely.
When Overhardt was reached for comment after contract talks broke off, Overhardt was very clear that Zigomanis would not be back but as a number of agents have told me “never say never”.
A source in the national media who covered Zigomanis on Wednesday for his day with the Stanley Cup, told me Zigomanis only two way offers on the table.
Calls to Kurt Overhardt have not been returned with it being the weekend.
Any deal for Zigomanis would be a two way deal as the Penguins are not looking to sign any 4th line depth players to guaranteed contracts.