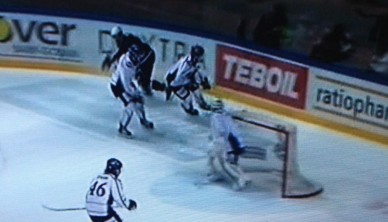 Olli Maatta, the Penguins 2012 first round pick, is a prospect Penguin officials are giddy about and a prospect they regard as the total package. In fact, there’s even some scouts who see some Ryan Suter type comparisons in Maatta.
I had a chance to catch Maatta in action (second & third period) today on NHLnetwork for Team Finland who defeated Team USA 5-1 pre-competition action.
Here’s my takeaway from Olli Maatta (1 assist, even rating) who was impressive and he fit the scouting report I’ve been getting from evaluators:
*The Penguins rave about Maatta’s size for an 18 year old as he’s 6-foot-2 and pushing 210 pounds and what really stood out with Maatta today is that he has a long wingspan and used his stick very well in passing lanes…..Maatta came off as a defenseman with a high-IQ in the defensive zone and Olli rarely got caught out of position. One thing he did well was clearing the front of net to give his goaltender a free lane of the puck….
While he’s not a bruising type defenseman like a Brooks Orpik, Maatta is effective at using his length and pinning players on the board….
Why the Penguins regard Maatta as the total package is that he plays both ends (offense, defense) well…… He’s not limited at all in the puck moving department and while he doesn’t have Kris Letang type skill set by any means, Maatta today showed great poise in carrying the the puck out of the defensive zone/through the neutral zone and picks his spots well in jumping up in the play….. A very mature player for an 18 year old.