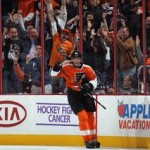 A ton of buzz for tomorrow night’s matchup between the Pittsburgh Penguins and Philadelphia Flyers and what a big surprise there.
The drama surrounding the game centers around Jaromir Jagr and Max Talbot when it probably should be about two of the best Eastern Conference teams facing off and the top two points leaders in Claude Giroux (44 pts) and Evgeni Malkin (42 pts) going head to head.
Pittsburgh and Philadelphia each have identical wins (21) and points (46) going into tomorrow night’s showdown but the team have been going in different directions of late as the Penguins are riding a four game winning streak, while Philadelphia has lost four of give games.
Jagr returns to Pittsburgh for the first time since the 2008 playoffs and we all know the situation by now after Jagr declined an offer this summer to rejoin the Penguins on a one year, $2 million deal when fans and even some local and national media types felt it was a done deal that Jagr was returning to Pittsburgh. Jagr in his storied career with the Penguins had 439 goals, 640 assists and 1,079 points in 806 career games.
All of that damage was done at the Civic Arena.
“I’m happy for them that they built a new arena, ” Jagr said today. It’s good for the fans and obviously good for the club.”
For a 39 year old, Jagr is having an excellent season with 11 goals and 30 points in 31 games for the Flyers. He ranks 3rd on the team in points. Jagr’s coach Peter Laviolette had high praise for Jagr today, following an afternoon practice at Ice Castle.
“His work ethic is excellent, ” Laviolette said. “You get to watch him work and see how much he cares. It’s not that you doubted it, it’s just that you wouldn’t know it. You don’t get to see that first until you get to work with them on a daily basis.”
As expected, Jagr had nothing of significance to say today and was asked some dumb questions such as this one: “Have you thought about how you’ll be received by fans who used to be fans of Jaromir Jagr when he played for the Penguins”? Jagr’s response was “What kind of question is this….. He came off trying to be sarcastic for much of the session and Jagr has no motivation that he has to prove anything tomorrow night.

“That would be the worst thing if I want to show somebody you still have it,” said Jagr. “I don’t to prove anything to anybody; I don’t think I would [be] playing my game if I wanted to show somebody.”
Penguins head coach Dan Bylsma who was one of the strongest advocates in the Penguins organization last summer to sign Jagr, chimed in on the future hall of famer. “Unfortunately for us we see a lot of highlights, ” Bylsma said. “Thatâs what you see when you watch NHL.com and TV in the morning. You see all the great plays.
“What heâs been able to do for their power play and Giroux has been very good. Those are things we saw him doing with our team, with a Malkin or Crosby. Am I surprised? Not really. Talking to Zbynek this summer and other guys at the World Championship, he was motivated. A real good player there as well and That was part of the reason we were interested at that tweet or text or the Russian paper.”

Talbot Excited about return to Pittsburgh

Max Talbot was loved by the Penguin fan base like a star player and the Penguins are expected to have some kind of “thanks for the memories” recognition for Talbot on the scoreboard in between whistles at somepoint in the game.
You can bet it will be his two goals in Game 7 of the Stanley Cup Finals vs Detroit.
“Maybe it’s not nervousness, it’s more excitement,” Talbot said today on returning to Pittsburgh. “It’s a game that at the start of the year you mark on your calendarâ¦ being back here in Pittsburgh is even more exciting. In the end, it’s a hockey match and it’s a big two points.
“I donât know what the reception will be….. Iâm sure Iâll get some positive ones, and maybe a little bit of a negative ones, â Talbot added.
It’s hard to find anyone connected to the Flyers complain about what Talbot has brought to the table for a new look Flyers team who’s top priority from management was to change the culture of the locker room.
Talbot comes into tomorrow night’s game with 9 goals and 15 points, averaging 16:03 of ice time.

Pens to see Bobrovsky in net

The goaltending matchup Thursday night will not feature Ilya Bryzgalov vs Marc Andre Fleury. The Flyers $51 million dollar man will sit for at least the next couple games due to poor play in goal.
Bryzgalov has been a star attraction on 24/7 off the ice, but hasn’t been on the ice for the Flyers. He has a line of 3.01 GAA and .890 save percentage and during the 26 games Bryzgalov has played in this season, heâs allowed four or more goals 10 times.
Bryzgalov gave up five goals on just 16 shots in the Flyers 5-1 loss to the Lightning last night. He will not get a couple games to rest and work with the Flyers goaltending coach.
âHe has to get better, for sure,â general manager Paul Holmgren said today, following today’s practice, via csnphilly. âHe obviously has to play better. Ilya knows the same thing. I do think he needs to spend a few days with Jeff working on some things which they are going to do. â Holmgren added.

Malkin on home crowd hopefully making Jagr feel nervous: “I hope the fans help us and Jagr gets nervous and doesnât score”
AUDIO LINK: Evgeni Malkin talks Jagr
Malkin on wanting to play with Jagr during the summer: “Of course I would have liked that. Again…. heâs a good player. I read in the newspaper and I hope he signed because itâs Jagr. {He’s} a good player and if he signed here, he would of course help us.”….Malkin later added that the Penguins signed a good player in Steve Sullivan.
Malkin has 18 points in his last 8 games and his line of Chris Kunitz and James Neal have emerged as one of the best lines in hockey. Malkin credits the three practicing together everyday.
“Because we work in practice everyday. We talk a lot, ” Malkin said.