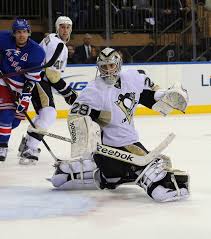 The Penguins took a 2-1 series lead over the New York Rangers on Monday night with a 2-0 shutout win thanks to strong goaltending from Marc Andre Fleury and timely scoring from Sidney Crosby and Jussi Jokinen.
Although the game wasn’t dominated by the Rangers by any means, New York outshot Pittsburgh 35-15. Game 3 was Marc Andre Fleury’s signature playoff moment, a game where at times the Penguins needed him to come up very big and he did. Game 2’s shutout was more about the Team Defense, Game 3 was more about Fleury.
Fleury has been in a zone the past two games that we haven’t seen from him in years during the post-season. This is such a critical post-season for Fleury in regards to his long-term future and while there is a lot of post-season still to be played, Fleury appears on his way to writing his story and that’s earning an long-term extension this summer.
The Penguins gambled on Fleury last summer in retaining him when many General Managers would have moved on and Fleury has answered his critics so far with a 6-3 record in the playoffs, including a 2.22 GAA and .925 save percentage. Back to back shutouts have seen his save percentage go from .906 to .925 in a matter of two games.
Even if the Rangers storm back and take the series or the Penguins go out in the next round early, you can bet on the Penguins committing to Fleury once again with a long-term deal. A big reason is that management doesn’t believe there is or are going to be many ideal options out there the next couple years.
ADJUSTMENTS FROM FLEURY, PENGUINS SINCE GAME 1
— Fleury was very erratic in Game 1 as his positioning and rebound control were poor. In Games 2 and 3, his positioning has been excellent and a big key for him the last two games in posting back to back shutouts. Do the Rangers need to start shooting quicker? The tape says, yes, and one Achilles heel for the Rangers is that they are not built with big strong power forwards who cause havoc in front of the net.
Fleury is prone to a few juicy rebounds a game and it’s much easier for the Penguins “D” to clear those rebounds against the Rangers than it would be playing a Boston or Philadelphia.
— Few ever want to give the Penguins coaching staff credit but the team has done a much better job this post-season than in year’s past in buying into team defense. The Penguins still have their lapses, and they probably always will with this group, but there’s been a more team effort from the forwards on when it comes to a commitment to team defense.
Of note, the team has made great adjustments since Game 1 in defending the slot. Personnel wise, getting Brian Gibbons back into the lineup has been huge for the Penguins penalty kill.
CHALLENGES FOR RANGERS
With their top players in Ryan McDonagh, Rick Nash, Derek Stepan and Marty St. Louis all struggling and a power play that is a disaster, the Rangers face a daunting task of winning three of the next four games to take series.
However, a bounce or two their direction and we could have been talking about a Penguins loss in Game 3.
I believe we’re going to find out very early into Game 4 whether the Rangers are a serious contender to win this series or not. They looked like in Game 1 but not at all in Game 2 and despite out-shooting the Penguins by a large margin in Game 3, the Penguins continued to defend well at even strength, keeping New York to the outside.
The Penguins defensively have been strong at not backing up into their zone and giving the Rangers space to come at them with speed through the neutral zone and into the Penguins zone.
Pittsburgh is forcing the Rangers to dump the puck in and go get it. The Rangers have few forwards who are making it tough on the Penguins defensemen. New York really misses Chris Kreider in this series.