On the Penguins and Ryan Callahan 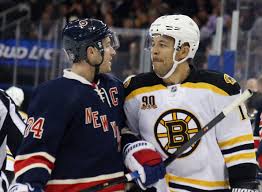 PENS HAVE KICKED AROUND THE IDEA OF GOING AFTER RYAN CALLAHAN
Ryan Callahan will be traded by March 5th. That much is certain. Callahan seeking $7 million per season as a free agent this summer has scared off many teams and led to somewhat of a limited market, but there’s a group of three to four teams showing steady interest despite the huge demands.
Are the Penguins surprisingly one of the contenders, despite Callahan’s high demands and the Penguins lack of cap space?
Don’t rule it out just yet with the trade deadline a week away, though, you can put them in the longshot category right now of actually pulling off a deal for Callahan.
The word out of the Callahan camp and around the league is that the Penguins are interested in Callahan and the talk that Penguins head coach Dan Bylsma is pushing hard for Callahan won’t go away and has been out there steadily for about a week now.
Bylsma one of the NHL’s highest paid coaches, has significant input and pull in personnel decisions.
The Penguins and Rangers are a potential first or second round playoff matchup but the Rangers have told teams from the start that they are willing to trade Callahan in conference and inside the division as they are set on getting the best deal possible, regardless of the trade partner.
Some believe the Rangers willingness to move Callahan to a division rival would only increase if they decide to part ways with Dan Girardi as the two sides have yet to finalize an extension.
The Penguins acquiring Callahan would purely be as a rental with the hopes that they could sell Callahan on wanting to stay here this summer and chase a Stanley Cup on a regular basis. Callahan’s representative is longtime agent Steve Bartlett who is very close to Penguins GM Ray Shero. However, you don’t go asking the Rangers for $7 million and then decide not to test the market.
NHL Insider Darren Dreger appearing on TSN Radio 1050 today mentioned the Blues, Penguins and Lightning as three teams he’s hearing out there on the Callahan front.
“St. Louis has to be a primary contender,” Dreger said when asked about potential destinations for Callahan. “Some want to link the Pittsburgh Penguins to Ryan Callahan,” Dreger said.
“Tough to make {deal}, not saying it’s impossible…….and the Martin St. Louis scenario won’t go away.”
My Take: At the end of the day, it’s hard to see the Penguins and Rangers being a trade match, regardless of the Penguins cap space and the two teams being in the same division.
Unless the Rangers move Girardi and decide to be focused more on the future than making a deep run, they are certainly going to seek a player or two they can plug into their lineup in any trade for Callahan.
The Penguins don’t have a Chris Stewart to trade for Callahan like the Blues have or a Marty St. Louis like the Lightning.
But, there is certainly some smoke out there regarding the Penguins looking into the possibility. I think the Penguins only become a serious player here if the Rangers decide to covet future assets (prospects, draft picks) than NHL roster players.