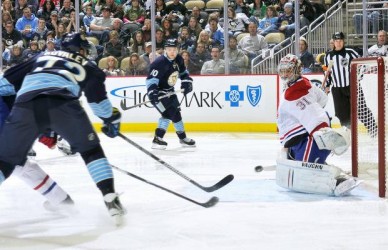 — With or without Sidney Crosby, the Pittsburgh Penguins (39-22-8, 86 pts) continue to struggle against the Montreal Canadiens (38-24-7, 83 pts), dropping 6 of their last 8 games against the Habs after Saturday’s 3-0 shutout loss.
The Canadiens are a team that the Penguins will need to stay away from in the first round as Montreal matches up extremely well against Pittsburgh and may even have the edge in goal, based off how well Carey Price plays against Pittsburgh and how Marc Andre Fleury struggles against his home-town team.
Montreal’s win was pivotal for home-ice in the first round as the Canadiens moved just 3 points behind Pittsburgh for the No. 4 seed in the Eastern Conference and claim the season series, 3-1. The Canadiens also closed Boston’s lead in the division to just 2 points.
Things are tightening up for the No. 4 seed, Pittsburgh holds a one point advantage over No. 5 Tampa Bay (38-22-9, 85pts), a team the Penguins have matched up very well against this year. However, everything is still wide open as Pittsburgh, Tampa Bay and Montreal are all within 5 points or less of division leaders Philadelphia (91 pts), Washington (88pts) and Boston (85pts).
After a disapointing performance yesterday, the good thing for the Penguins is that they’re right back at it this afternoon hosting the Edmonton Oilers (23-37-9, 55pts) who boast the worst record in the NHL and have lost three straight. The Penguins then hit the road Tuesday night against the Ottawa Senators (25-34-9, 59pts), who have won three straight and are 7-3-0 in their last 10 games. Two games the Penguins need to get points out of.
— To win in the playoffs, a team has to be deep down the middle and other than a lack of scoring production, that’s one of the major question marks surrounding the Penguins going into the stretch run, obviously due to injuries to Sidney Crosby and Evgeni Malkin.
More reasons for concern? Pittsburgh is not getting good enough “consistent” two-way play from Jordan Staal (minus-4 in last 5 games) right now. Staal was badly outplayed in Saturday’s 3-0 loss by Canadiens No. 1 center Tomas Plekanec.
Staal is going to be one of the Penguins x-factors down the stretch and in the playoffs. He’s never going to produce offensively like some want him to but he’s going to have to be a dominant defensive force against the oppositions top-center. He isn’t meeting those expectations right now.
A first round matchup could very easily have Staal up against a Steven Stamkos or Tomas Plekanec.
— Since Sidney Crosby has been out of the lineup (1/6/11 vs MTL), defenseman Kris Letang is a minus-14 in his last 28 games and has just 11 points during that span.
He was a turnover machine in yesterday’s loss and the sense is that he’s trying to do to much and has gotten away from what made him such an effective defenseman during the 1st half of the season.
— Alex Kovalev has just 1 goal in his first 8 games but he remains one of the Penguins better offensive players and continues to create offense on a nightly basis. His linemates aren’t finishing plays and Kovalev’s going to have to start relying on his shot more often. He has just 9 shots on goal in 8 games with Pittsburgh.

Race to the Playoffs