Penguins Eliminated: Bruins close out Game 4 with sweep of the Penguins 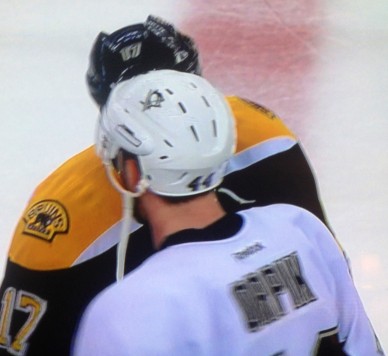 The Boston Bruins are onto the Stanley Cup Finals for the second time in three years. The Bruins proving that being the most talented team on paper means nothing, closed out Game 4 with a 1-0 shutout win, eliminating the Cup Favorite Penguins from the 2013 playoffs.
The Penguins being swept is the first time in franchise history since 1979.
Losing to this Bruins team is no shame but the way the Penguins lost in being swept and scoring only two goals is. Pittsburgh NEVER held a lead in the series.
Evgeni Malkin and Sidney Crosby had no goals and no points in the series and the only Penguins to record points was Paul Martin (2 Assists), Chris Kunitz (goal), Brandon Sutter (Goal), Pascal Dupuis (Assist) and Matt Cooke (Assist).
Pittsburgh went 0-for-15 on the power play in the series and all the Penguins continued to do was send out the same personnel over and over.
The Bruins showed a great display of team hockey as the structure Boston played with was just on another level than the Penguins.
The 2013 Pittsburgh Penguins will be remembered as nothing more than “paper champions”.