Penguins establishing a “different look” on the power play 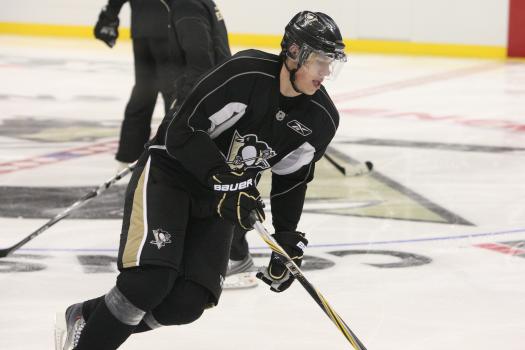 Focus turns to the power play
The Pittsburgh Penguins put extensive work into their power play during Tuesday’s workout. The Penguins top unit featured Mike Comrie in the middle, Chris Kunitz down low and Sidney Crosby at the half boards with Evgeni Malkin at the left point and Alex Goligoski at the right point.
After years of under-achieving on the power play, Pittsburgh is establishing a “different look” with more of a focus on being aggressive and getting pucks to the net.
Defenseman Alex Goligoski talked to Inside Pittsburgh Sports about the Penguins new look power play.
“Every one’s getting comfortable with what we’re trying to do out there, ” Goligoski told Inside Pittsburgh Sports. “Trying to be more aggressive with our attacking, ” Goligoski added.
The Penguins spent about 15 minutes today working on the man-advantage and what stood out to me was the quick puck movement they had and the multiple formations they used.
Sidney Crosby for one was very active working set plays from the right and left half boards, while Evgeni Malkin and Alex Goligoski were often rotating from the left and right points on set plays for Malkin to unleash a one-timer.
With Sergei Gonchar no longer around, the Penguins are trying to be less predictable.
“We’re kind of switching everything with our power play, ” Goligoski said. “We have a different look and we want to be aggressive, shoot the puck and establish guys for a front net presence.”
One noticeable change is that the “middle guy” is going to play a big role in the Penguins aggressiveness. Mike Comrie played in the high slot working as a passing alternative and his presence backed a penalty killer off Goligoski or Malkin. His job in that role is to also be aggressive and get to loose pucks.
“He {Mike Comrie} can sometimes be in the middle, down low, be whatever the situation dictates, ” Goligoski said.
The Penguins second unit today included Michael Rupp, Tyler Kennedy and Mark Letestu down low with Paul Martin and Kris Letang at the points.
Rupp who scored 13 goals last season was the “front net” presence on that unit. What was interesting is that Eric Tangradi was the odd-man out today on the power play. Tangradi replaced Rupp for only one live 5-on-4 session then Rupp was immediately back in there.
Practices sometimes dictate what a player’s future might hold like it did today with defenseman Andrew Hutchinson who rarely took reps with the top-4 pairings. But, Tangradi skated on the second line for the few line rushes early on, so read what you want into that.
Asham Injury Update
Winger Arron Asham (shoulder) has not been ruled out for Thursday’s game. He is believed to be doubtful and I wouldn’t expect him to play but it doesn’t appear his injury is very serious. He was walking around the Penguins facility and attended the Penguins luncheon this afternoon. He didn’t look like a guy with a serious shoulder injury.
Asham has what’s been described by a source close him as some “discomfort” in his shoulder area that should get better with a few days rest. He under-went further tests on Monday by team doctors in Pittsburgh.
If Asham remains sidelined for the opener and more games after that, head coach Dan Bylsma expects Tyler Kennedy to fill Asham’s spot on the third line.
“Cooke and Tyler Kennedy practiced last two days together, ” Bylsma said. “Those guys have been the wings on the third line here for a while and will probably be the case.”
Opening Night Festivities
A red carpet entrance for the players and an outdoor screen for fans to watch all the action will be among the highlights Thursday night when the Penguins play the first regular-season game ever at CONSOL Energy Center.
Penguins players will walk a red carpet to enter the arena at the American Eagle Outfitters Gate – at the corner of Fifth Avenue and Washington Place. Fans are invited. Players are expected to be entering between 4:15-5:00 p.m.
An outdoor screen will be placed at the same location for fans to watch the 7 p.m. game against the Philadelphia Flyers, as well as pre-game festivities.
“It already is going to be a very special night, but we wanted to do some unique things outside the arena for our fans,” said Penguins CEO David Morehouse. “The red carpet entrance will give fans a glimpse of our players heading into the first regular-season game in the history of CONSOL Energy Center. And the outdoor screen has become such an iconic symbol of playoff hockey in Pittsburgh – we thought it would be great to have the screen for the first game.”
For fans attending the sold-out game, there will be an exciting ceremony before the game inside CONSOL Energy Center. Fans are asked to be in their seats by 6:45 p.m.