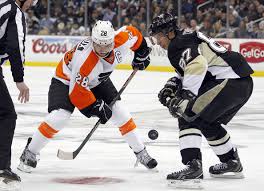 The Pittsburgh Penguins have dropped three straight games for the second time this season, losing to Philadelphia 2-1 on Wednesday night at the Consol Energy Center. Brayden Schenn scored twice and Ray Emery was outstanding making 30 saves in the win as the Flyers are creeping back with three straight wins. Philadelphia is now 7-1-1 at Consol Energy Center.
Sidney Crosby scored the Penguins lone goal, a power play marker at 8:29 of the second period, finishing off a great cross-ice feed from Evgeni Malkin. Marc Andre Fleury made 19 saves on 21 shots to fall to 10-5 on the season.
Here are some key takeways from the Penguins 2-1 loss:
1. — This was a game coming in that the Flyers really needed and the start kind of resembled last Wednesday night’s game for the Penguins vs the Rangers. The Penguins came out buzzing led by Sidney Crosby and had a Chris Kunitz goal disallowed 19 seconds in but the Flyers were able to weather the storm and took a 1-0 lead late in the first period with a goal from Brayden Schenn at 16:02 of the period.
I thought Philadelphia was the better team the rest of the way, despite the Penguins out-shooting Philadlephia 31-21 and Pittsburgh attempting 65 shots. Philadelphia was excellent in shutting down the Penguins through the neutral zone in the third period. Trailing 2-1 the Penguins managed just six shots on goal in the third period and two shots through the first 11 minutes of the period. Crosby afterwards still felt the Penguins did enough to win. “We feel like we deserve better, but we still didn’t get the result we wanted,” Crosby said.
2. — A growing issue with the Penguins: The arrogance of the coaching staff to not get away from tough matchups. It’s a huge problem (has been for a while) and was really the storyline of tonight’s game. It was mind boggling how Bylsma let Craig Berube dictate the matchups all game. Philadlephia by the way was the road team….. The Flyers constantly got Sean Couturier out against Sidney Crosby and the Schenn line out against the Malkin line. The head scratcher was Bylsma having Deryk Engelland out against the Giroux line on a regular basis for the first two periods. Even with the Penguins missing Paul Martin, pairing Brooks Orpik with Deryk Engelland is an odd-one when the coaching staff wants Brooks Orpik matched up against the Flyers top line.
3. — The Penguins have zero even strength goals in their last three games. Tonight they attempted 65 shots but what we see is the same issues they had against Boston; Not enough players willing to get to the tough areas in front of the net and cause havoc which lead to those dirty goals. Is it coaching, personnel? I’m leaning towards players. “We’re not doing enough around the net to get those goals that I think were there,” Penguins coach Dan Bylsma said afterwards. “We had opportunities, there were rebounds, there were situations, but we’re not able to get in their end and finish and find those rebounds.”
4. — The hope has been that Jacques Martin would have a positive impact in Kris Letang playing with more structure to his game. Letang at certain points this season has looked like he is playing pond hockey and to be honest I don’t think the coaching staff has it in them to realm him in. Just no structure to his game right now.
5. — One player the Penguins missed tonight on the third line was Jason Megna, a healthy scratch. Megna shouldn’t be sitting over Matt D’Agostini who I don’t see lasting with the team. The problem with Bennett – Sutter – D’Agostini is that not one of those player’s games is built around getting to the puck first on the forecheck and winning battles in the corners. Just unheard of on a third line to not have one player who somewhat has some sandpaper to his game. The Penguins sometimes are too infatuated with skill. Bennett – Sutter – D’Agostini combined for 1 shot on goal when on the ice together.