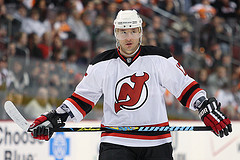 Pittsburgh Penguins (0-2-0) @ New Jersey Devils (0-1-1)
Where: The Prudential Center | Time: 4:08 p.m.
The Penguins travel to New Jersey to face the division rival Devils in the first of six meeting between the teams this season. New Jersey took it to the Penguins last season, capturing all six games between the two teams and holding the Pens to five total goals in those matchups.

Put shortly, the Penguins probably won’t be able to afford another series with the Devils like the one they experienced last season. In those six games, the Devils outscored the Penguins 22-5. It was the first time either team swept the other in divisional play.
The key to avoiding an 0-3 start Monday at the Prudential Center will be getting off to a fast start. In three of the last four matchups, the Devils were on the board within the first five minutes of the game.
Saturday, the Penguins had problems protecting a lead. They will be in a bigger, more familiar hole Monday if the Devils get on the board early.

Both teams are looking to walk out of Monday’s tilt with their first win of the season.
The Penguins are 0-2 to start the campaign, suffering a pair of 3-2 losses to rivals old and very new. The Canadiens game was surprisingly feistier than the opener against in-state rival Philadelphia. Saturday’s game with the Habs accrued 30 PIM between the teams, as opposed to 22 with Philadelphia.
New Jersey is 0-1-1 after suffering a 7-2 drubbing at the hands of the Washington Capitals Saturday. Goaltender Martin Brodeur was pulled in the second period of the loss.
The Devils lost to the Dallas Stars in a 4-3 overtime decision to open the season.

Paul Martin faces his former team Monday. It is the first time he will play against New Jersey, the only other team with which Martin has played in his NHL career.
In six seasons with the Devils, the former second round choice played 400 games, and totaled 26 goals (137 total points). Martin was a career plus-55 with New Jersey, including a plus-10 in only 22 games in 2009-10.
Martin has two assists and is a minus-one in two games with the Penguins.

The power play, thus far, is failing the Penguins. Again. The team went 0-6 Saturday, with a 5-on-3 chance, and is a meager 1-11 on the season.
The Pens are without Jordan Staal and Arron Asham for the forseeable future. It seems that line combinations will be more lottery than familiarity until the team is at full strength.
That said, 5-on-5 goals may not come as easy as last year (when the Pens were 5th overall in goals scored but 20th in power play success).
Pittsburgh needs to capitalize on the man-advantage, even more so against a New Jersey team that held them to 5 goals in 18 periods of hockey a season ago.

As Crosby and Malkin go, so go the Penguins?
Two games in, it seems that way. Crosby has one assist and is a minus-two. Malkin owns a goal and a minus-one rating. The Pens are 0-2.
Last season, Crosby finished as co-owner of the Rocket Richard trophy and made a late push for the Art Ross. Malkin finished at a better-than-point per game clip in a season abbreviated by injury.
The duo registered four combined points in ten games (Malkin missed two due to injury) against the Devils last season.
Both forwards will play with new linemates Monday (Mark Letestu centering Malkin, Mike Comrie on Crosby’s wing.)

General Manager Lou Lamoriello broke the piggy bank to land Ilya Kovalchuk this summer. The repercussions are being felt after two games.
As stated in a piece run earlier, the Devils are in real danger of being able to field only three forward lines for Monday’s game.
In a report originally filed by Tom Gulitti of NorthJersey.com, defensemen Anton Volchenkov and forward Brian Rolston may be held out of the tilt.
Volchenkov exited the Washington game with a broken nose. Rolston suffered a lower body injury. Neither took part in practices Sunday.
Complicating matters for the team is the suspension of forward Pierre-Luc Letourneau-Leblond for instigating a fight Saturday.
Because the team is already pressed tightly to the salary cap ceiling, they can make no call-ups for the game, short of sending anyone currently on the roster to long-term injured reserve.
Kovalchuk has two assists and is a minus-one through two games.

Mark Letestu gets a small promotion after recording his first goal of the regular season against Montreal.
“The best asset Mark Letestu brings is his smarts in playing the game,” Bylsma said. “His goal is an example of detail and smarts and knowing the opposition and knowing what’s going to happen on the ice and getting an opportunity because of it.”
Letestu is expected to center the second line with Malkin and Eric Tangradi on his wings.
Mike Comrie is set to move to the first line on Crosby’s wing, a combination that was suggested when Comrie first signed with the team.
Pascal Dupuis will be demoted to fourth-line duty, after “getting away from his strengths” in the eyes of the coaching staff.
“Better puck management, a little more speed and getting on pucks and creating things,” Bylsma said. “Some of the details of what made his successful last year have not been there and he’s gotten away from that in his game.”
More specifically, the team wants Dupuis to return to his role as grinder, even as a top-line winger.
Dupuis in a minus-one with no points thus far.

Jordan Staal remains out for the Penguins while recovering from foot surgery and an infection resultant of the procedures. Arron Asham also remains shelved with a shoulder injury.