The NHL’s review goal/review process is turning into a disaster. A playoff game is going to be decided in the wrong way and last night a playoff race almost was.

It’s amazing how this league always goes out of their way to prevent goals.

The Islanders first disallowed goal was a travesty that it wasn’t a good goal, yet, the reviewed goal late in the Penguins – Devils game last Friday night was somehow a goal when it was textbook goaltender interference.

The refs and the league are now running into a problem because there’s becoming no precedent of what’s interference and what’s not.

I’ve been in favor of a goaltender inference review process and it serves its purpose at times, but you have these refs looking at a small tablet and they’re not able to make proper calls.

The off-sides review rule is also becoming a complicated process and we continue to see why some GM’s have pushed to abolish it.

Last night the refs actually made the right call on the Anders Lee goal after the review but how many times a year do we actually see missed calls like the Briere one from the 2012 playoffs that started the push for the off-sides review? 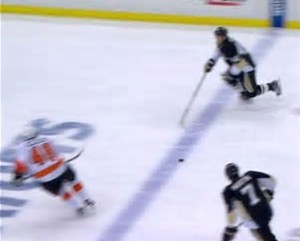 The league is again preventing goals when a fraction of a players skate is over the line. The off-sides review rule should be scrapped with all goaltender interference calls coming from Toronto.

— For the Penguins, you know things are going your way when the opposition hits three crossbars and has a disallowed goal in the first period that should have counted and then the No. 11/No. 12 defenseman on your overall organization depth chart ends up being a major difference maker with a goal and assist, including a great individual play on the game tying goal in the third.

The Penguins play from their sixth defenseman has been poor of late, but Gaunce who got an opportunity last night with Frank Corrado being quite underwhelming the last games, had a key impact on the game.

— Marc Andre Fleury had an interesting night. The first 40 minutes he was very beatable and wasn’t tracking high shots well. Fleury allowed 3 goals on the first 22 shots he faced, .863 save percentage.

Fleury, though, went on to turn aside the final 24 shots he faced and was peppered with 21 shots in the third period. He would go on from having a save percentage under .865 after two periods to finishing with a .935 save percentage (43 saves on 46 shots) in the game.

*Lost 5 of their 7 games in shootouts

Bonino carrying his line has trickle down effect

Nick Bonino having another late season surge isn’t just good news for him personally as he’s a few months away from free agency.

It’s a significant development for the Penguins from the standpoint that unlike last year where the HBK line came together, Bonino is carrying his own line right now with lesser linemates.

With the impact Phil Kessel has had in elevating Evgeni Malkin as a goal scorer the last six weeks (prior to Malkin’s injury), Bonino’s ability to carry his own line like he’s doing of late and did Thursday night vs the Senators where the Kunitz – Bonino – Rowney line was the Penguins most impactful line, especially in the third period when the game was tied, it gives the Penguins the ability to be even more dangerous to matchup with.

As great as the HBK line was last post-season and the Penguins depth overwhelming teams, the Penguins weren’t maximizing Malkin as he was hurt at times with getting the third best set of wingers.[/hide]

Who is the new board tard?

Hell of a win for PSU. They just beat Union 10-3 in their first ever NCAA tournament game.

935% damn … wish, I was still in that first period, that’s not inside info, it’s owe my head hurts concussion brilliance

Uhh, because the Big Orange Dealmaker threw up all over himself this week when his negotiations failed, now he’s racing around, catatonically, looking for others to blame, the House GOP, Ryan, the Freedom Caucus, Democrats, his son-in-law, the media. I guess he forgot that Obama passed the original legislation with only D votes, doing a better job with his party than DJT did with his. Just sayin’. Best thing that ever happened to him and us, if it gives him some humility and perspective. He’ll also get another chance, if he’s smart and doesn’t sulk for too long. (Do you… Read more »

This is the most oversimplified misplaced bunch of bullshitt I’ve read since the last time yogurt tried to blame fleury for losing a game behind this AHL lineup.

Very true. Why it’s being posted on here is beyond me. It’d be nice to go somewhere and not hear about politics.

Sorry, just responding to Rothey’s comment. Didn’t mean to make you think too much, sorry.

Why is it so satisfying hearing liberals cry after months and months of laughing at trump running for office?

Npl must be depressed