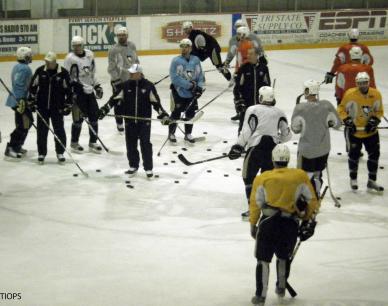 Pittsburgh leads series, 3-0
The Carolina Hurricanes and Pittsburgh Penguins each went through their final preparations this morning for game 4 of the Eastern Conference Finals.
Pittsburgh was loose and looked like a team that is up 3-0 in a series.
Based on what we’re hearing and the rotation of seven defensemen during the morning skate, Philippe Boucher will be in the lineup tonight and the Penguins will dress seven defensemen for the seventh consecutive game.
Pittsburgh has won 5 of six games when dressing seven defensemen in the playoffs.
If Pittsburgh wins tonight they will become the first team since the 1984 Edmonton Oilers to advance to the Stanley Cup Finals, the year after losing in the finals.
Carolina forwards Scott Walker, Erik Cole and Tuomo Ruutu missed practice on Monday but all three forwards skated during the teams morning skate and will play tonight.
Winning that fourth and final game in a series is difficult as your facing a desperate team that has nothing to lose.
Pittsburgh found that out in their second round series against Washington, when the Capitals beat the Penguins 5-4 in game 6 to force a game 7 in Washington
Following the teams morning skate, the Penguins talked
about being prepared to close out the series tonight and not taking a shift off.
“When you get the opportunity to bury them, you have to,” said Jordan Staal, as he was number of players in the locker room talking about how the Penguins want to close out the series tonight.
Dan Bylsma added the Penguins are not looking ahead.
“We’ve got to be ready for our best game, We’re not done with this series yet.”
Led by veterans such as Bill Guerin, Pittsburgh is not going into tonight’s game with the idea that the Hurricanes are going to roll over.
Notes
The Lines in the morning skate were
Kunitz – Crosby – Guerin
Fedotenko – Malkin – Talbot
Cooke – Staal – Kennedy
Adams – Crosby/Malkin – Satan
*Dupuis – Zigomanis – Sykora
extra: Godard
* Evgeni Malkin and Sidney Crosby each took reps with the 4th line. Mike Zigomanis went through a full practice for the duration of the skate. Zigomanis skated with Pascal Dupuis and Petr Sykora.
Zigomanis, Tyler Kennedy and Pascal Dupuis along with Matheiu Garon were the last players on the ice.