Penguins – Sabres: Will Bylsma make it to year 3 in Buffalo?

Penguins not to blame for Pouliot’s lack of development

As Derrick Pouliot was re-assigned again this morning, his lack of development is reaching the point where it now falls on his shoulders.

Nearing the end of his 3rd professional season, he’s just not an NHL defenseman yet and that’s the reality of the situation.

Pouliot was taken 8th overall in the 2012 draft and was No. 4 on the Penguins board because the amateur scouts in the organization believed he was a special offensive defenseman. Penguin scouts were so giddy when the trade was made and Pouliot was still on the board you would have thought the Penguins landed Erik Karlsson.

The long-term problem isn’t that Pouliot can’t play his own end well enough at the NHL level. He was never expected to be a strong defensive player. The issue is there’s not even much to like from a skill standpoint that screams legit NHL player.

Some will say you can’t judge a draft until seven to eight years. It’s fair to say already the Penguins badly miscalculated with the selection of Pouliot but that’s not the point anymore.

No team is perfect with the development of their young players but this organization has tried almost everything to get the most out of Pouliot and the poor body language from Pouliot nearly every time he’s been called up is having some in the organization counting down the days until Pouliot is a member of another organization.

The Penguins, though, publicly will continue to say all the right things as Mike Sullivan did this morning.

“Derrick is in the process,” said Sullivan. “We still believe in him. We believe he’s a good player. He’s a talented player. This is part of the process as a young player. Some players’ learning curves are faster than others. Playing defense in this league is the hardest position to play. The adjustment for a young defenseman is the most difficult. Derrick is just going through the process.”

— The Penguins going back to Matt Murray tonight after Fleury posted a shutout Sunday afternoon is not surprising because in the coaches eyes Murray remains the clear No. 1. One source close to the situation said since Murray didn’t get the next start after shutting out Vancouver on March 11, it was pretty much a guarantee Murray would go tonight and that it would been a bad look not to go back to your No. 1 following Fleury’s shutout on Sunday.

That said, from a perception standpoint, If Murray struggles tonight the noise will keep getting louder from pundits.

What matters, though, is that a great four game run from Fleury hasn’t changed anything internally and Penguin coaches have made it a point not to make the goaltending situation a controversy inside the room right before the playoffs start.

Fleury has not made consecutive starts since 12/31/16 vs Montreal and 1/8/17 vs Tampa Bay when Murray was injured.

— The organization is excited about Frank Corrado and feel there’s some untapped ability they can get out of him. The Penguins believe he could compete for a depth role out of training camp next season. He’s not in the Penguins plans this season with the NHL club but a nice opportunity for him tonight to get his feet wet with the big club.

The call up today was unexpected but with Penguin coaches wanting to get Pouliot back to Wilkes Barre, it opened the door for Corrado to come up. 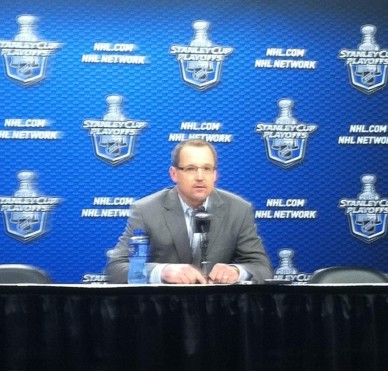 Will Bylsma make it to year 3 with Buffalo?

— Year two as coach of the Buffalo Sabres for Dan Bylsma was supposed to be a season of growth for the Sabres where some believed they could be a 90+ point team and push for a playoff spot.

Despite getting .922 save percentage goaltending from Robin Lehner and having the NHL’s best power play, the Sabres are again near the basement of the Eastern Conference and destined for a top-10 pick.

Bylsma hasn’t brought an offensive brand of hockey to the table. Buffalo is one of the NHL’s worst 5 v 5 scoring teams and have terrible possession numbers.

Ray Shero and Bylsma are in similar situations with their respective clubs.

New Jersey and Buffalo have each been passed up by other rebuilding teams in their division by wide margins, Columbus in the Metro and Toronto in the Atlantic.

Now for both you have to wonder if either will still be around when or if the Devils/Sabres become playoff teams. Shero is not on the hot seat and has great support of the Devils ownership group for now, but Bylsma’s chances of returning behind the Sabres bench are said to be 50-50 at best, per league sources, as the latest scuttlebutt is the Sabres made an attempt weeks ago to hire To read this insider news, subscribe to get “Inside Access”!

Racist sam is back! How do you get off calling anyone out with that wretched BO?

I guess nothing significant happened in last night’s game. We’d definitely have a new article up if that were the case.

i’d guess a two game suspension, which for a bottom feeder team will teach him a real lesson

Can we get an article on the whereabouts of Mike Johnston and Michel Therrien? I assume they are both enjoying incredible amounts of success, as Sam told you clowns they would, but I would like to know more.

Guentzel diagnosed concussion, indefinite injury… wish Sestito played, would have felt better had he watched the play from the bench…

Terrible news. Hard not to love his play since he’s been up. That first line was a lot of fun to watch. Hopefully geno gets back and continues his play. For as bad as the injuries are, it’s nice to have this forward depth.

Me too. He was probably too busy pounding your mom again.

It’s interesting how you seem to disappear for the same period yoda does… does he not let you internet while his balls are pressed up against your lips?

i disappear at times because i have a job.

Unlike Stan collects tax payers money and spend all his day on this site.

Like you use transfer payments to live in your mothers basement? At least she whores!

So he pays you?

if guentzel is out long term, that’s bad news for the pens. it’s going to be tough to go deep with kunitz on the 1st line.

I’m sure you prayed about that injury too

Agreed, Sid may not get his trophy now… guess we need to stop worrying about the division and just load up that top line ignoring the magical idea of chemistry…

With the number of bodies out I wouldn’t scoff at Hornqvist on his line until Malkin returns but other than that I’m more concerned about them maintaining the balance that leads to them winning!

sestito should be in every game during the regular season. you saw what happened when the jets took liberties. sesitio should have been on the ice the shift after guentzel got effed up.

What would that have accomplished?

what do you mean? are you a nun? the sabres take a run at one of our kids, sestito should have been there taken a run at one of their kids. i guarantee the jets won’t be taking any runs at the pens any time soon. it accomplishes a lot.

Right. Take a run at one of their kids. Or he’d have played grab-ass with whatever version of a “heavyweight” they pretend to still have and accomplished nothing. This must be the first season you’ve watched hockey. You’ll learn. You’ll learn.

Ya that would have prevented Guentzel from being hurt.. no? then what? He runs around like an ass looking for revenge putting the two points that was not a done deal until late at risk? Best case scenario is this team wins the metro and has a lighter 1st round allowing sometime for the injured players to work out some of the rust. The 2 tonight was important you half wit dumbfuck

Sam, who scored that goal?

Sam has been getting owned all night on here. Happens every day though. He will hide until the next nonsensical thing appears in his fat head.

Georges had the same look Sam’s mom has after she gets ganged banged.

Kessel needs to stop passing up shots on the power play.

This is a solid, yet unspectacular game. Very little in terms of points, so not sure if fans are getting there money’s worth. Its the Jonathan Toews of hockey games to this point.

Nice article D
Same was right DB will not last his contract and other teams will realize he is a fraud and never get a job again unless shero hires him.

So he got fired then? Can you show proof?

You were right about Mike Johnston too. Remember when you said hed be more successful than Bylsma?

He was also right about Bob Hartley. And Patrick Roy. And Michel Therrien.

Kessel leads the league with points in pp

Ok… although that’s an excellent point. Without Kessel Sid would not be leafing the league in PP goals!

What a cheap hit. These players have no one to blame but themselves when it comes to these head shots. They have zero respect for each other.

I’m just as disappointed in the power play afterwards!

I’m disappointed that guentzel is likely drooling on himself like sam at a gay bar.

How many more of those hits can he take? That wasn’t his first this year.

Again D, only you and Samantha care about Byslma. Who didn’t see this blurb about Byslma coming. When Samantha gets back from his timeout, his Byslma posts will be flowing tonight.

According to D and Samantha, it’s always 2012 on here.

Typical clown no the difference between same and u same saw DB is a con man while.team was doing good average bandwagon fans only see DB sucks when team is bad. And that includes you in it too