Penguins under-acheived across the board in series loss 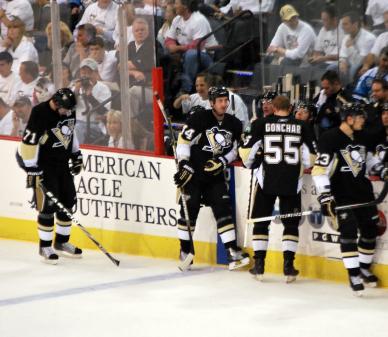 The Pittsburgh Penguins season came to an abrupt end Wednesday night as Brian Gionta scored two power play goals and Jaroslav Halak made 38 saves, including 18 in the third period en route to a dominating 5-2 Game 7 win to upset the defending champs in the Eastern Conference Semi-finals.
The Canadiens winning game 7 was not shocking considering they have been the better team since game 4 and have the better goaltender, but the manner that Pittsburgh lost has sent shock waves around the NHL.
From the drop of the puck, Montreal set the tone, seizing a 1-0 lead on a Brian Gionta power play goal, only 32 seconds into the game. Sidney Crosby was called for boarding 10 seconds into the game and Crosby was stunned and shocked by the call.
“I don’t know how that’s a penalty 10 seconds into the game, ” Crosby said.
Montreal took over the game from there.
Pittsburgh nor goaltender Marc Andre Fleury were able to respond and the Canadiens built a shocking 4-0 lead just 5:14 into the second period.
Sloppy play in the defensive zone and poor goaltending put the Penguins in a 4-0 hole.
Moen’s short-handed goal at the 5:14 mark told the story of the game as Moen beat three Penguins for the puck on a 1-on-3 situation and beat Fleury with another soft goal.
Marc Andre Fleury’s play was horrendous and was pulled in the second period after giving up 4 goals on 13 shots.
The goaltending change gave the Penguins life as Chris Kunitz scored at the 8:36 mark in the second and Jordan Staal deflected an Alexei Ponikarovsky shot from the left point past Halak to cut Montreal’s lead to 4-2 with 3:30 remaining in the second period.
Johnson gave Pittsburgh an opportunity to get back into the game by just making routine saves and the Penguins had a prime opportunity to get within one goal as the Penguins opened the third period with a power play after Josh Gorges was given a two minute penalty for cross checking Pascal Dupuis with 10 seconds remaining in the second.
With momentum suddenly in Pittsburgh’s favor and the crowd roaring, the Penguins failed to capitalize on a 4-on-3 advantage to open the third and were 0-for-3 on the power play in the third period and 0-for-6 in the game.
A Brian Gionta power play goal at the 10:00 minute mark put the game away as Montreal took a commanding 5-2 lead and put a dagger into any hopes of a Penguins comeback.
The Canadiens played a complete team game and Montreal’s defensive system frustrated the Penguins over the past two games.
The Canadiens played suffocating defense in the neutral zone forcing 14 Pittsburgh’s turnover. The Penguins were unable to make the needed adjustments.
However, the Penguins lack of “want” is what was shocking. The Canadiens wanted it more and the Penguins thought things were going to come easily and it clearly didn’t. The Penguins surprisingly looked like the team that lacked the type of experience needed to win a game 7, making costly turnovers.
Defenseman Brooks Orpik who has been very critical of his team over the past couple months, didn’t see it that way. “They beat Washington, now they beat us,” Orpik said. “I think it’s time to give this team some credit for what they’ve done, rather than picking apart why we didn’t do what we were supposed to do.”
For Pittsburgh a number of players under-achieved across the board, most notably their big stars which is what was their downfall.
Notes:
*The Canadiens will go down in history as winning the first game ever at the igloo, winning 2-1 on Oct. 11, 1967 and winning the last game ever.
Pittsburgh has lost 3 of their last 4 game 7’s at home. They are now 2-5 all-time at home in game 7’s.