Penguins will look to continue to dictate the play offensively 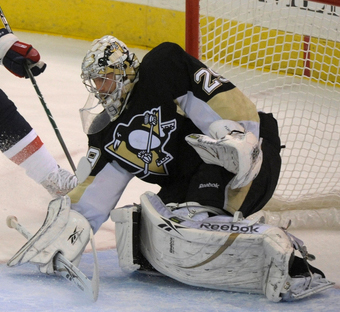 The Montreal Canadiens are breaming with confidence as the series shifts to Montreal tonight for game 3. After knocking off the Washington Capitals in the first round, Montreal is looking to surprisingly go up 2-1 against the defending champions.
The Canadiens stole game 2 in Pittsburgh behind timely goals from Mike Cammalleri and a 38 save performance from goaltender Jaroslav Halak.
However, is the Canadiens game 2 win being overblown? Pittsburgh dominated play in game 2, out-shooting Montreal 30-9 in the final two periods and the loss was more about Pittsburgh failing to execute and Jaroslav Halak being the difference maker.
Montreal did some good things defensively, keeping Pittsburgh to the perimeter and offensively they turned d-zone coverage mistakes by Pittsburgh into goals.
Still, Montreal’s win was more about Pittsburgh not executing than Montreal shutting them down.
Taking home-ice away from Pittsburgh, Montreal now has a golden opportunity with three of the next four games at home. The Canadiens are 1-2 at home this post-season
Pittsburgh though is at their best when they are challenged and are 3-0 on the road this post-season.
What to watch for
1. Marc Andre Fleury – The Penguins No. 1 netminder has been subpar at best during the Penguins playoff run. To this point, there hasn’t been a game where the Penguins needed Fleury to be great. However, Pittsburgh needs him to step up and improve his play. Fleury does not need to match Jaroslav Halak because the Penguins are the ones who have been dictating play but he needs to play like a $5 million a year goaltender.
2. Evgeni Malkin – Like Fleury, Evgeni Malkin is taking a lot of heat for not performing like one of the best players at his position. Dan Bylsma has tried to jumpstart Malkin’s line by using Tyler Kennedy on Malkin’s wing in game 2. Tonight Malkin will likely see a right wing by committee with the likes of Max Talbot, Pascal Dupuis and Tyler Kennedy seeing time on the second line.
3. Bill Guerin – Guerin did not participate in the Penguins morning skate due to what is being described as a sore back. There is optimism that Guerin will play but if Guerin’s back hinders him from playing, it will be a blow to the Penguins who are already without Jordan Staal.
4. Special Teams to play a key role?
The referees tonight are Brad Watson and Kevin Pollock. Pollock and Watson call tight games and are known to call a lot of holding and interference penalties. The two reffed game 2 of the Sharks/Red Wings series Sunday night. 10 penalties were called against Detroit and there were a total of 14 minor penalties in the game.
5. Montreal’s “Little” 3
Montreal three primary acquisitions this off-season came up big in Montreal’s game 2 win. Mike Cammalleri scored goals seven and eight of the post-season, while Brian Gionta also scored and Scott Gomez added two assists.
Final Thoughts