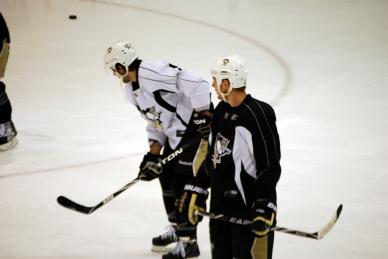 As the Penguins begin their push towards the playoffs, preparations for the upcoming off-season has already started inside the organization. Extensive organizational meetings between the staff and front office won’t begin until after the season but preliminary evaluations are under-way between the Penguins scouting staff and front office personnel.
The Penguins have a tough off-season ahead of them, with 11 players including defenseman Ben Lovejoy not signed beyond this season.
The Penguins have approximately $41 million committed to 13 players for the 2010-2011 season and only two defenseman under contract for next season. The Penguins project to have $16-$17 million to play with this off-season.
According to multiple team sources, the team will first move quickly on Kris Letang following the season with the 2010 entry draft June 25–26, 2010 regarded as a pivotal date inside the organization.
Letang who declined a multi-year offer worth slightly more than $3 million per season in late February, is the Penguins wildcard in their off-season plans.
There continues to be discussions between Penguins management and agent Kent Hughes.
Although the threat of an offer sheet does not worry management, I’m told that if there is no movement in contract talks by late June, Pittsburgh will listen to offers for Letang at the NHL entry draft. Getting the Letang situation resolved or a general sense of clarification one way or another before July 1st, is expected to be priority number 1 for Pittsburgh.
The Penguins remain hopeful to sign the young defenseman.

By the Numbers: Pens 2010 free agents