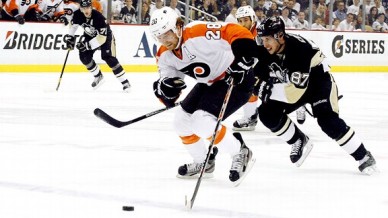 On the brink of falling down 0-3, we’ll find out a lot about the Pittsburgh Penguins hockey club this afternoon when the puck drops at 3:08 p.m.

For the past couple weeks, even after wins, a common theme coming out of the Penguins locker room has been frustrations among key players about the Penguins looking to “out-score teams than out-defend”. All the frustrations from players though, has just been lip service as it’s defensive breakdown after defensive breakdown for the Penguins with the same issues being there on a nightly basis.
The Penguins are giving up 4.2 goals against in their last nine games, and some of it’s personnel but the big issue according to at least oneÂ scoutÂ I spoke with this weekend is the Penguins “mindset”.
“They clearly have a mindset problem, ” an NHL source said. “It’s in theirÂ identity to push the play in transition and {that} can be dangerous hockey when you’re [continuously] looking for that long {or stretch pass} pass through the neutral zone against Philadelphia that can come right back at you.”
“Ken Hitchcock isn’t coming through that door, ” the source added, when asked if it’s feasible for a coaching staff to suddenly revamp their system to a more defensive structure on such a short span in between games and whether he expects the Penguins coaching staff to go away from their offensive attacking style (that they believe in)Â and decide toÂ tighten things up. “A coach trying to go away from what he believes [system] in…. it just leads to trouble, ” the source said mentioning Bruce Boudreau in Washington as an example.
TIDBITS
— If the Penguins lose today, my feeling on the game is they implode and lose by three or four goals. If the Penguins win, I see them squeaking out a close win and turning the pressure on Philadelphia going into Game 4.
— Marc Andre Fleury has to start coming up with timely big saves that Philadelphia has got from Ilya Bryzgalov. Fleury isn’t the main problem for Pittsburgh’s defensive woes but let’s not kid ourselves, he’s hasn’t been great by any means. Fleury is 10-12 with an .save percentage in his last 22 post-season games. He needs to steal a game.
— Has Jordan Staal lost some of the “defensive focus” Â he’s been accustomed to having in previous years, regarded as one of the best shutdown centerman in theÂ NHL.Â “He’s seems to be looking to create more offense {which isn’t a bad thing]…but has it made him less focused or responsible the d-zone? You can say it has, ” a scout said who watches the Penguins on a regular basis. Staal is a minus-17 in his playoff career.
— Spoke about this some yesterday but the Chris Kunitz – Evgeni Malkin – James Neal line has combined for 0 even strength points and a minus-14 rating through two games. Evgeni Malkin has struggled to produce in the playoffs at even strength and has 0 even strength points and a minus-7 rating in his last 10 playoff games, dating back to Pittsburgh’s quarter-final series against Ottawa in the 2010 playoffs. The Penguins top line has to get something done today at even strength.

— Max Talbot tied for a league high +4 rating in the playoffs, has 2 goals and 4 assists and a +5 rating in his last nine playoff games. Talbot is a +18 in his last 63 playoff games.
— The Flyers are 2-3 on the power play in the series and the Penguins success on the Penalty Kill during regular season isn’t translating to the post-season, something of an issue since the 2010 post-season as the Penguins are 51-73 (69.9%) during that span. I asked around on this and no one seemed to have answers why teams in best-of-seven series seem to be figuring out the Penguins PK unit. The Flyers have done an excellent job at spacing the Penguins out.
— Flyers Defenseman Nicklas Grossman leads all players in the series with 8 blocked shots. The Penguins top-6 defensemen have combined for 13 blocked shots in the series. Brooks Orpik and Kris Letang lead Pittsburgh with 4 blocked shots.