Pens lose another tough one 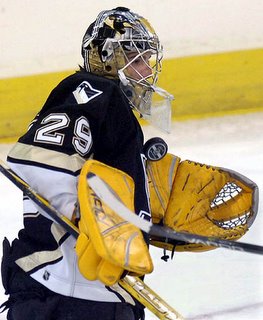 When you spot a team like a the Ottawa Senators a 4 goal lead, most likely you going to come out of that game with a loss. The Pens started off the first period relatively strong getting 2 prime scoring chances from Sergei Gonchar with rockets from the point, but he couldn’t connect. After that inexperience and a lack of focus doomed the Pens.

The second period like most of the year has been a problem for the Pens and Wednesday night was’t any different. Ottawa scored two power play goals, then a turnover in the neutral zone, which led to a 2 on 1 break for Daniel Alfredson and Danny Heatly which resulted in Heatly putting one past Marc Andre Fleury to put the Sens up 3-0. Right before that goal the Pens had their chance after being awarded a 5-3 power play which they couldn’t counter on. The personnel on their 5-3’s is a problem. Mark Recchi is not a good point man on a 5-3. He is more suited for point duty for 5-4 power plays. He had two or three chances to let it rip from the point and he was tentative and passed the puck. For five on three situations the first power play needs a right handed shot at the point. Gonchar – right point, Jackman – left point, Quellet, Leclair and Crosby down low. Jackman is not scared to shoot the puck and with a lefty righty combination at the points if gives them two options for one timers.

Heading into the third period down 4-0 the Penguins were a different team. John Leclair started the rally with his 13th goal of the season early in the third period. Leclair has 8 points in 5 games and has been playing very well since January. Then out of no where Andre Roy netted his first of the year, and 33 seconds later Jani Rita scored his first goal as a Penguin, with a beautiful pass from John Leclair. The Pens outshot the Sens 14-7 in the third period but fell short. The one positive sign of this game was the no quit approach they had in the third period. The credit for the effort has to go to Mike Therrien who has a no quit approach to his coaching tactics.”The good thing is, we didn’t quit,” Therrien said. “Hopefully, they’ll bring that third period to the next game.”

Buck’s Penguins insider.
– Konstantin Koltsov had a excellent game. I cant believe im saying this but he was the best player on the ice for the Penguins last night. He brought lots of energy to the game, and was rewarded for his effort by going from the 4th line to the 2nd line. The most encouraging sign for him was he was making plays offensively. Hopefully he can bring the same level of play saturday night.

Sidney Crosby was non existence last night. The Senators were not letting him get any openings and shut him down for the most part. One thing Sidney needs to learn especially playing against a team like the Senators is he doesn’t need to attack their defenseman 1 on 1 , 1 on 2 everytime down the ice. Sometimes Sidney needs to force the opposing Defenseman like he’s going to attack then pull up for a moment and dish the puck to a open trailer. Gretzky was famous for that, pullin up and setting up a teammate for a prime scoring chance. Especially on the 5-3 powerplay in the second period I saw it. Sidney was coming down the right side and went at Chara 1 on 1 and Chara just poked the puck away and shot it down the other end. All he had to do was pull up and set up the power play. The kid is a great player already, but he still has a lot of learning to do.

Steelers news.
– This Cba situation is ridiculous. I can’t believe this league may go from the best in sports to becoming like baseball where all the big market teams rule the league. Talks have broken down as of this morning and it’s not looking good. Thursday we may see tons of big name players getting cut.