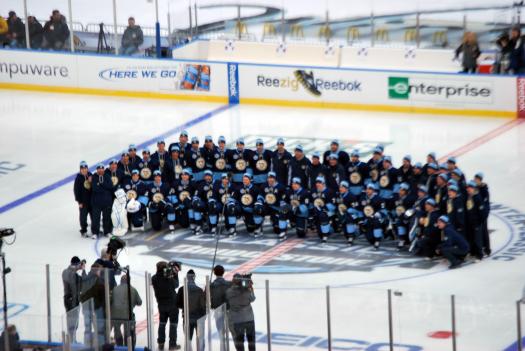 DePaoli on Twitter
11:30 a.m. – The players are making their way onto the ice to “Lets go Pens” Chants.
The Pens started out practice with a team photo and are now going through a fun scrimmage with players turning their sticks around and such.
12:00 p.m. – The ice saw a little rain but nothing serious by any means.
12:10 pm – About 40 minutes into the Penguins practice, the team is begining to go through their normal line rushes.
Centerman Jordan Staal is skating on the 4th line with Mike Rupp, Arron Asham and Craig Adams as a group of 4.
The top two lines have stayed the game.
Kunitz – Crosby – Dupuis
Cooke – Malkin – Talbot
Conner – Letestu – Kennedy
Rupp – Staal – Adams/Asham
Eric Godard is not practicing.
*Defenseman Deryk Engelland is taking the majority of reps as the 3rd pairing with Alex Goligoski. Looks like he will play tomorrow over Ben Lovejoy.
*Jordan Staal is the January moustache boy. Paul Martin was the December Moustache boy.