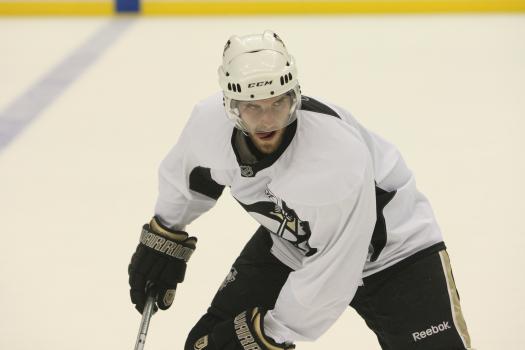 The Pittsburgh Penguins revamped their first power play unit this morning. Alex Goligoski is no longer on the point but remains on the 1st unit playing the middle “roamer role”.
Down low with Goligoski is Chris Kunitz in front of the net and Sidney Crosby at the half boards.
Paul Martin has jumped into Goligoski’s spot at the right point and Evgeni Malkin remains on the left side in what Dan Bylsma calls the “attacking role”
I asked Goligoski today about playing the new “roamer role”.
“I’ve kind of played that roamer spot before, you know, where your just kind of roaming around finding open areas, ” Goligoski said. “But I like it, you always feel like your in the play, just have to get open, be a good outlet obviously around the net and try to score some goals.”
Goligoski’s switch to the middle of the ice won’t be the only change as Paul Martin will man the right point.
Through three games defenseman Martin has shown great poise at the point and that’s what head coach Dan Bylsma is looking for tonight.
“He’s been on the top unit, we had two goals we he was out there, ” Bylsma said with a chuckle. “You know Paul, as we said early on into training camp, I could expect to see all of those guys… Kris Letang, Paul Martin and Alex Goligoski on the top unit at any given time and tonight it’s going to be Paul Martin and Alex Goligoski will be out there.”
“Paul will be the guy working in the middle of the ice, coming across the blueline, so it’s a different look, ” Bylsma said. “It’s what he was doing with the second unit. So, he’s obviously gifted in puck distributing, poise and reading the play. He will be out there tonight.”