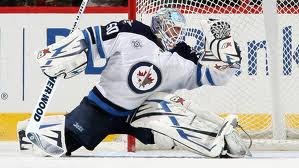 Some Saturday night Pens tidbits:
— According to a league source, defenseman Paul Martin has recovered “well” from a concussion he suffered in Game 3 of the Penguins first round series with the Flyers. I’m told Martin likely would have been cleared to play at somepoint in the second round. “Paul is fine, ” the source said. Martin is believed to have no restrictions when it comes to his off-season regiment.
— The Penguins have yet to inform backup goaltender Brent Johnson or his reps at CAA Sports that the team won’t be bringing back the 35 year old netminder.
However, it’s pretty much a foregone conclusion that following the Penguins professional scouting meetings next week, Johnson’s camp will be receiving word from Penguins brass that the organization won’t be making Johnson an offer before July 1. Johnson, 35, looked finished last season, going 6-7-2 with a 3.11 GAA and .883 save percentage. There were some in the organization who believed Johnson was done being a No. 2 goaltender and Johnson’s struggles prompted the team to look into the trade market for a backup goaltender but the asking prices were too high on two of the Penguins targets, Minnesota’s Josh Harding and Winnipeg’s Chris Mason.
Johnson is very well liked in the locker room and his only hope of returning next season is if the Penguins scouting staff, brass determine that the main factor in Johnson’s dropoff in play was injuries.
Meanwhile goaltender Brad Thiessen and Scott Munroe are also unrestricted free agents this summer as there is currently no depth behind Marc Andre Fleury.Â The Penguins are said to not believe Thiessen is a viable No. 2 goaltender at the NHL level, and I spoke with Ian Pulver on Friday, the agent for Brad Thiessen, and I got the sense from Pulver that Thiessen will hit the open market if the Penguins don’t offer a one-way contract and I wouldn’t expect one to be coming.
Some of the notable goaltenders who are scheduled to be unrestricted free agents on July 1 include Tomas Vokoun, Josh Harding, Scott Clemmensen, Chris Mason, Marty Biron, Jonas Gustavsson, Johan Hedberg, Curtis Sanford, Dwayne Roloson, Al Montoya
AROUND THE NHL
— Here’s a stat that shouldn’t sit well with the Penguins. The Los Angeles Kings entering Game 2 of the Stanley Cup Finals tonight have given up 23 goals in 15 playoff games. The Penguins in 6 playoff games, gave up 30 goals.
— Bruins goaltender Tim Thomas being serious about sitting out next season doesn’t surprise many around the league. Thomas who has one year left on his deal with a cap hit of $5 million, does what he wants, when he wants, but there’s still a belief with this situation that Thomas knowing it was very likely the Bruins were going to trade him before his No trade clause kicked in on July 1, is the main reason for this tactic.
— Spreaking of the Bruins, former Penguin Chris Bourque has signed with his fathers hometown team and while it’s aÂ  stretch to think Bourque can actually crack the Bruins lineup next season and be a regular, the Bruins appear to be high on him.
âI told [Chris] that I think he has a good chance of making our team. I told him that heâs just not there to go to Providence,â Bruins GM Peter Chiarelli told the media this week. âIf he goes to Providence then thatâs great, but giving him a one-way deal in the second year speaks to how we feel about Chris. Heâs got a couple of areas to work on and I told him that.â
âHe does have the ability to shoot and find seams, but he also has a grit element to his game where he can play lower down in the lineup if he has to,â said Chiarelli. âI told him â among other things â that he needs another quarter-step to maintain it at this level, and heâs a young guy so I think he will.â
Bourque has 1 goal in 33 career NHL games. After playing in the KHL in 2010-2011, Bourque returned to North America in 2011-2012 and had 27 goals and 94 points in 73 games for the Hersey Bears.