With a 4-3 loss to the New Jersey Devils Friday night, mental lapses continue to be the theme surrounding the Penguins lately as the playoffs are just 18 days away.

The Penguins played a great first and third period but a disastrous stretch early in the second period saw the Devils score three times in a 3:39 span to go from trailing 1-0 to leading 3-1 after forty minutes.

“We have mental lapses for short periods of time and it’s costing us and you can’t have that this time of year,” head coach Mike Sullivan said afterwards.

The concerning part for the coaching staff is that some of these mental lapses are continuing to come from some of their best players defensively.

Some wonder if the Penguins can win a Stanley Cup with Chad Ruhwedel or Matt Hunwick as their No. 6 d-man.

Last post-season shows they can and whether the Penguins get back to the Stanley Cup Final or not isn’t going to come down to a No. 6 defenseman. And that’s the belief the Penguins came to when they had no problem including Ian Cole as a thrown-in to Ottawa for Derick Brassard to make the money work.

A bigger burning question for the Penguins heading down the stretch run and into the playoffs is the mental lapses surrounding Kris Letang’s game.

As good as Letang is when he’s on his game, he plays so much that the mental lapses around his game right now are killing the Penguins some nights.

It happened again in Friday’s loss to the Devils and the 4-on-4 goal allowed was another prime example.

In a 4-on-4 play, the Penguins in their own end play a man-to-man coverage and the job of any defenseman is to protect the front of the net.

Letang has coverage on Taylor Hall down the right side and as Hall makes a cross-ice pass, Letang goes for a stroll behind the net, leaving Nico Hischier all alone in front for a tap-in goal. 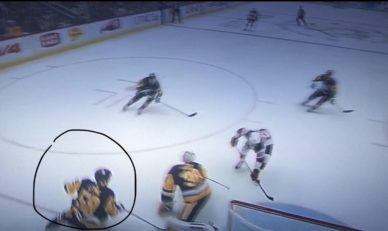 A defenseman the caliber of Letang, that just can’t happen in deciding to take a skate around the net.

Early in the season it was about getting Letang right physically, now as the playoffs are around the horizon, everything about Letang’s game is eliminating the mental mistakes.

They are plaguing Letang on a nightly basis and the frustration with the coaching staff saw them alter the first and second pairing after the Hischier goal [hide] where Justin Schultz was moved up with Brian Dumoulin.

It was a small sample as Schultz exited in the third with a minor injury but will be interesting if we see this pairing some more.

“We had success in the first and third period and that’s how we have to play,” Sidney Crosby said.

Must be a glitch in the box score kessel with 2 assists I didn’t even see that chubby play today most of the day he was a ghost. Must’ve been hungry for his daily snack

3 best players on the ice today was Crosby, brassard ,rust

Your sheary was shit. Even his assist I bet was just a dump and not intend to lob a pass to brassard

Actually Sheary had a decent game lol. I mean as usually it’s ugly but he wasn’t bad on that line!

He missed a nice pass from chubby. It was empty net for him and be game winner and not give flyer’s that extra one point

The pass was cut off by Simmonds you fucken idiot lol

I don’t disagree, what’s your point? I mean Malkin also played a strong game but we know you’d never see that either…

Offensively they all looked decent.

Letang sucks he has 1 assist in the game and most hits 5.
Crosby also sucks had 2 points and second most hits for the team with 4

Letang also lost his guy at the side of the net for the tying goal lol. He better offset that shitt

Pierre agreed with Sam! One dumb Canadian and one wannabe Canadian agree.

What did he agree ? That average penguins fans are bunch of bandwagon’s?

What a pass! Sid brought it today. Would like this to be a trend.

He looked terrific out there, hopefully he can keep it going. These guys need to do a better job on team D but the offensive threats are showing a lot to like. Again though, the lack of discipline on the defensive end is a problem

Well that knocked the Rust off them.

Letang with a solid job playing the body on the 4th goal.

5 is the new magic number for Murray

lol are you Pierre?

Because you’re also a fucken idiot

Stood there and watched his guy bury it. He’s a complete disease. Philly set their season high in shots. Brutal.

He has no awareness whatsoever. He’s standing right next to the guy who scores the goal and he can’t see him.

With Murray in. The team can hit a new standard maybe minimum 5 per game

Thanks box score. Is McDavid still in Vancouver?

Welcome back from vacation!

I hope Letang is watching the Ghost today. That dude knows how to run a powerplay.

Any team with Letang on their roster will need at least 4.

Hakstol looks like Mike Johnston, who Sam once said would be a very successful coach for the Pens.

Flyers have 20 shots on goal. Based on his career save percentage against the Flyers, Fleury would have given up 8 goals by now.

Traded to the Kings yet?

Not a lot of trade value with speculation rampant that hell be heading back to Russia in 2013.

Can the Penguins sit Letang and use two goalies at the same time instead? Is that against the rules? They can just stack Murray ontop of DeSmith.

They are probably tired from that long travel to the arena.

Yes specially when it’s at the museum and when they play the flyer’s. But today seems refs want the pp specialist rolling never know pens can came back in game with all these pp

Bad glove on 1, terrible positioning on the last one. Positioning is his strength and he looked bad against NJ also with positioning. Wonder if he rushed himself back too soon to get work before playoffs.

Stop washing his ballss bro. It’s crazy how much people come for his rescue. Even media. The guy has no pressure

I don’t think. He just seems to play like this after layoffs. He’s made some saves to keep them in it, but would like to see a save on the 2nd goal. The first one was a defensive breakdown and a pretty well placed shot.

Well placed shot or not, his glove barely moves, which shows a problem with reaction time…

Yeah his glove his one of his weaker points I’ll give you that.

Get lost chubby.
Go back to your #FatLivesMatter movement
Nobody wants you and your thumbs downs here
Except for zerotool

Last time MAF returned from a concussion he almost lost the TB series momentum giving up 4… what’s your point?

He’s strong stronger as the game goes on… he’s been out with concussion so his head may not be fully back. Hopefully he sorts it out before the playoffs.

How did dumo and Schultz looked on that goal and chubby watching the play. Yeah letang suckkss ehhh

I agree. Letang does suck.

I agree, Letang has lost it. I don’t think it’s fatigue, he just makes the worst mental decisions possible. Trade him or buy him out at the end of the year.

Remember when Fleury was so bad it forced a reporter to say Giroux was the best player in the world? Lol memories.

Who put the goal differential from the 2012 playoff series against the Flyers on my post?

Pens will be playing vs another backup goalie

Any update on the Carolina GM search?

New defensive pairings. Oleksiak and Letang as “top” D pair. Dumo and Shultz, Maata and Ruhwedel. They should start Letang in the penalty box. It’s the only place he can’ be out of postion. I just saw this stat.. since the trade their goals per game went from 2.9 to 3.5.

D any update for today’s game. ? .
I’ll make one for you how many goals pens need in order to win for Murray today.
Game at 12:30. Expect a museum atmosphere from the so called fans.
Could be a cake walk for flyer’s today in that museum?
P.s Zerotool and Npl Suckss

Had a dream last night, Pens will lose 4-0… Letang will be on the ice for all 4 goals

What a beautiful pass by marleau to kadri tonight

Murray has yet to play a full season by goalie standards and I am starting to wonder if he has the conditioning to do so. I do not know where or how but they need a veterian backup badly. Jarry and DeSmith are not the answer nor will they be a threat to take his job. The AN experiment failed. Will there be any good backups in free agency this summer?

Vegas loss 2-1 shootout. Guess who was in net zerotool. The guy that suppose to be gone for a concussion according to your dumb. Asss

I said it was internet rumours… considering he just missed two games and didn’t initially fly with the team? He was under protocol at least you stupid fuckk lol

No surprises here, that issue has been 58’s his entire career

I have been saying this for months that Letang is making disastrous decisions….whether it is bad pinches, poor gap control, letting a guy be 30 feet behind him to start overtime (like last night) or just leaving the front of the net unprotected. Also guys like Jordie Benn of Montreal (on an expiring 1 year 1 million dollar deal) where available after the Brassard deal for the bottom pairing defense and we didnt do it.
Now we have to hope Rudewhel and Matta can survive in the playoffs.and that Letang gets his head out of his ass…

You clowns drool over names. Benn in Montreal been disaster many games he hands the pucks straight to the other team and they score.

Wtf does that have to do withanything?

Benn is like scuderi. Panics and tosses the puck like a hot potato and cost team goals

I want Philly 1st round, then Washington 2nd round. This team appears to go through lulls when ever they are not emotionally invested. I think playing 2 huge rivals in philly and wash will have this team mentally locked in. Just finish the year healthy please.

Letang may take a skate around the net but watch Murray. Completely overplaying the shooter. The guy was below the face off circle

Right now Letang sucks and Murray is off,,,

Maybe it is time to stop playing Letang on the first PP untit, on the PK, during 3 on 3 and cut is team leading ice time down a lot! He plays his best hockey when he is in the penalty box. I understand he went through a lot last year but it does not take a gifted player and entire season to remember how to play hockey again. It is time for him to go, unfortunately no one will take on that contract without sending a shit contract back.

I agree. With his erratic play this season, it’s time to shelter his minutes.

Agree 100% GET HIM OFF THE NUMBER 1 POWER PLAY BECAUSE HE HAS NO SHOT FROM THE POINT. HE IS HORRIBLE IN PK COVERAGE AND AWFUL IN OT 3 ON 3..YOU ARE SO RIGHT..

All the goals Murray let in were weak

Yeah, that’s certainly been the case the last two years.