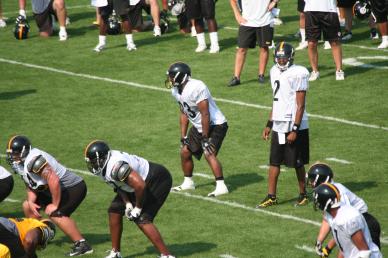 With Charlie Batch sidelined, the Steelers have targeted veteran QB Cleo Lemon as a potential replacement for Batch but as of Monday evening, the Steelers have yet to move on Lemon.
Lemon was under consideration early Monday morning for a tryout that would have been conducted on Tuesday.
The team has also reached out to free agent quarterback Jeff Garcia but Garcia signing in Pittsburgh is very unlikely to happen according to a source.
Reportedly the Steelers are talking to as many as 6 free agent quarterbacks but for now the Steelers will go the practice squad route.
TIOPS Steelers contributor Mike Bires is reporting, that the Steelers will sign quarterback Tyler Palko to their practice squad. That annoucement could come as early as Tuesday according to Bires.
Despite the potential signing of Palko, it doesn’t mean Lemon or even Garcia won’t be in for a tryout in the near future.
Adam Schefter of ESPN first reported Monday morning that backup quarterback Charlie Batch will under-go wrist surgery and could miss up to 6 weeks. Batch will have the surgery on Wednesday, likely ending his season.
Quarterback Ben Roethlisberger (mild concussion) was evaluated on Monday and will be cleared to play against Baltimore.