Post-Game Buzz: Breaking down Penguins 5-2 loss and is Tangradi’s opportunity with Malkin nearing an end? 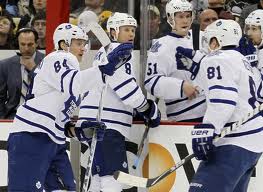 The Penguins had seven giveaways and were plagued by poor puck management Wednesday night in their 5-2 loss to the Toronto Maple Leafs, whether it would be a failure to get pucks deep or turnovers inside their own end.
“There just wasn’t enough execution with the puck and management of the puck to play where we needed to play,” head coach Dan Bylsma said.
“We didn’t have enough shifts in their end and we didn’t execute and make passes thru the neutral zone as good as we could have. Definitely not our best game,” Penguins captain Sidney Crosby said afterwards.
Poor puck management played a part in nearly every Leafs goal:
Clark MacArthur’s goal at 3:09 of the second period to tie the game at 1-1 was a perfect example of that. Eric Tangradi was the culprit coming into the Leafs zone off the rush and made a poor pass to James Neal down the left boards, leading to a turnover just inside the Leafs blueline and the Leafs quickly went the other way on a 3-on-2 rush as Simon Despres got caught initially and the Leafs put it in the back of the net.
The Malkin line was victimized for most of the night and Malkin made an awful turnover in his own end on James van Riemsdyk’s game winning goal at 14:32 of the second period when Malkin threw an errant pass right to the middle of the ice in his own end that ended up right on Van Riemsdyk’s stick for the goal.
The dagger was Mikhail Grabovski’s goal 5:18 into the third period that put the Leafs up 5-2 when forwards Malkin, James Neal, Chris Kunitz, and d-men Kris Letang, Matt Niskanen got caught running around out of position in their own end, leading to the goal.

The Maple Leafs have matched up so well with the Penguins because of their team speed. In the Penguins weekend wins against Philadelphia and New York, Pittsburgh defended well through the neutral zone in not letting the Flyers or Rangers came at them with speed.
From the start, Toronto was very good in the transition game and gave Pittsburgh trouble defensively with their team speed. Just a 1:30 into the game, the Grabovski line was giving the Penguins second pairing of Matt Niskanen – Kris Letang trouble, beating Niskanen with speed through the neutral zone and getting a 2-on-1 opportunity. This line gave Letang and Niskanen fits for most of the night.

The Penguins have tried to talk themselves into that Eric Tangradi can be a fit on Evgeni Malkin’s left wing because they don’t want to breakup the third line of Matt Cooke, Brandon Sutter and Tyler Kennedy.
Just because Tangradi is a big body and can be a net-front presence, doesn’t mean he could work with two elite talents like the Penguins had thought. You have to be able to get Malkin and Neal the puck in space and be able to make a skilled play at NHL speed and even a just simple offensive play at NHL speed. Because of that, there’s been major concerns and doubts at least from my end in Tangradi being able to play with these two, in addition to his poor defensive zone play.
Although one week in camp and just three games isn’t a long audition, Bylsma appears to be seeing the light. Following Tangradi’s turnover leading to the Clark MacArthur goal in the second period, Tangradi barely saw the ice and really from the start of the game, Bylsma was using multiple combinations with Malkin and Neal, from Matt Cooke to Tyler Kennedy to Chris Kunitz to even Brandon Sutter seeing some time at left wing.
Tangradi had just 6 shifts and 4:27 of ice time. He’s really struggling in finishing around the net and is also struggling in just making a simple play in getting the puck to Malkin and Neal off the rush. In addition to that, I can bet the coaching staff hasn’t felt he’s using his size enough as a physical presence down low.
I was told last week Bylsma intended to give Tangradi a good 8 to 10 games with Malkin and Neal, but I’m not sure now it’s going to last that long.
The Penguins have viewed Kennedy or Cooke as last resorts because they want to keep them together on the third line and the plan has been that if Tangradi faltered, Jeffrey would get the next look but the coaching staff seems to have no confidence in him, making Cooke Or Kennedy the most likely internal options.
One sleeper option not to be rule out, (although unlikely), and there’s been some chatter about this is that Bylsma and his staff have discussed making Dustin Jeffrey the third line center and moving Brandon Sutter up to left wing with Malkin and Neal and Sutter going back down to the third line during defensive situations. It’s not what they want to do but could be forced to.