Post-Game Buzz: Jeff Zatkoff looks like an AHL goalie for one night, Pens plagued by sloppy play in 6-3 loss to Panthers 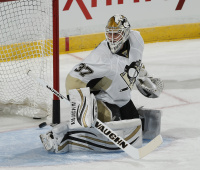 FLORIDA 6 – PITTSBURGH 3
The Pittsburgh Penguins suffered their first defeat of the season with a 6-3 loss to the Florida Panthers on Friday night. The Penguins opened the season with three straight wins and those victories were built around strong defensive play and an improved defensive structure. All of that was thrown out the window for one night.
It was clear very early in the game this was going to be a game where Pittsburgh looked to be more interested in playing up and down hockey than playing smart two-way hockey.
Turnovers in their own end and giving up odd man breaks were common throughout tonight’s loss.
One question mark with the Penguins is always going to be if they can truly become a stout defensive team in the long run this season, which is going to tell the story of whether they get to where they want to go, Stanley Cup Finals. We have a ways to go to find that out.
Starting a backup goaltender who is making his first career start, the Penguins gave up too many opportunities and special teams was a big factor as the Panthers scored twice on the power play and Pittsburgh was 0-3 on the man advantage.
Dan Bylsma on the Loss:
“The chances and opportunities we gave up in this game right from the start, a couple 3-on-2’s early in the first period,” Dan Bylsma said. “They score the goal, guy getting left alone for the net front goal for the second {goal}. We go down to the 5-on-3 and 5-on-4 where they score the two goals. That’s a tough spot to be in and we just gave them way too many opportunities,” Bylsma said.
All eyes were on Jeff Zatkoff and it was a performance that gave more questions than answers about Zatkoff.
Zatkoff looked like an AHL goaltender and his play was very poor, stopping 24 of 30 shots. First game jitters for Zatkoff was expected but the game just looked too big for him, which will obviously raise some red flags. Zatkoff was plagued by poor positioning as he took bad angles on many pucks and he got caught too many times in being too deep into his net. Zatkoff was very vulnerable glove side and a product of that was him being too deep into his net.
Zatkoff reminded me of Brad Thiessen in NHL action two seasons ago and Zatkoff was blunt afterwards in that he didn’t come up with the big save. “I needed to make a big save and didn’t do it, ” Zatkoff said. I need to get better and make sure I’m ready for the next one.”
As bad as Zatkoff was, the Penguins didn’t play good enough in front of him defensively.
“He got his first start in National Hockey League and I don’t think it’s the opportunities we want him to face in the first period,” Bylsma said. “And then getting down 5-on-3 and 5-on-4, and 5-on-3 poor angle shot that squeaks in there……..We probably gave them twice as many good opportunities as we had {given up} in first three games.”
Evgeni Malkin (1) and Pascal Dupuis (1) each scored in the loss and Craig Adams (3) added his third goal of the season with a goal in front late in the first period. Tanner Glass created the goal with a hard play around the net by getting the puck on goal as the 4th line continues to play surprisingly good hockey through the first four games of the season.
Also of note, Olli Maatta again looked very good and his offensive game is really standing out as he’s carrying the puck with a lot of poise and making that good first pass on the breakout which is critical in the Penguins system. Maatta played a career high 16:42. He is gaining more and more confidence on a game by game basis.
Decision time is looming with Maatta already having four games under his belt and Kris Letang likely back in the lineup by Tuesday night.