Post-Trade Deadline Buzz: Penguins thought they had a deal in place to re-acquire Carl Hagelin 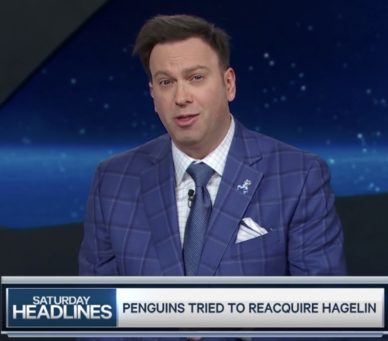 An odd situation has emerged out of the trade deadline in that the Penguins not only tried to re-acquire Carl Hagelin, the team thought they had a deal in place to acquire Hagelin from the Kings just prior to Hagelin being traded to the Washington Capitals.

What makes this so odd is when Hagelin was traded on Nov 28, it was crystal clear in the CBA that’s been around since 2013 that the Penguins would not be eligible to trade for Hagelin again this year since the team retained $250,000 of his salary.

Yet, no one from either team initially realized [hide] this as two league sources confirm reporting from Sportsnet’s Elliotte Friedman.

“In the days leading up to Carl Hagelin’s trade to Washington, Pittsburgh tried to re-acquire the winger,” Friedman writes. “Before the trade was submitted for Central Registry approval, someone noticed that the Penguins were ineligible to do it.”

Pittsburgh had a deal in place with LA that trumped the Capitals offer as the Penguins would have sent a 2020 third round pick + a 2019 5th round pick, Inside Pittsburgh Sports has learned. Industry buzz is representatives from LA finally realized the trade was impossible to do but the league office was at least aware that this trade was going to be sent to the Central Registry as the league in the days after felt the need to inform clubs again that no team can re-acquire a player they are retaining salary on.

Pittsburgh’s interest in re-acquiring Hagelin potentially puts him in the discussion to be targeted on July 1. [/hide]

Openly admitting the mistake? Hell, I’d rather him try than sit on his thumbs.

Who the hell is running this team?!! Lets trade away more draft picks for a player you already had and got rid of.