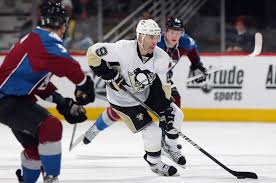 PENGUINS PRE-CAMP BUZZ
Pascal Dupuis working his way back from ACL surgery in February has been skating extremely well for the last two weeks during informal workouts. Dupuis, though, was evaluated by team doctors last week and is considered unlikely to be given the go ahead to play in the preseason until at least next weekend at the earliest. The Penguins open the preseason Monday, September 22 vs Detroit and end the preseason on Wednesday, October 1 vs the Red Wings. The Penguins intend to be cautious with Dupuis who will practice with the Penguins right off the bat on Friday but likely won’t endure full contact.
Dupuis scored 7 goals in 39 games last season before tearing his knee on December 23 vs Ottawa.
Dupuis has skated with Sidney Crosby and Chris Kunitz extensively during pre-camp workouts at Consol and Crosby loves playing with Dupuis, but head coach Mike Johnston might have other plans. While the Penguins coaches will do a lot of experimenting in the first couple days of camp, including young guys like Kasperi Kapanen, a significant long shot, for one playing with Sidney Crosby.
Sources say in evaluating the tape from last year, Johnston prefers to move Dupuis off Crosby’s line to open a spot on Crosby’s right wing and is very intrigued about Dupuis fitting with Evgeni Malkin.
Penguins coaches would like Beau Bennett or Patric Hornqvist to lock down the top right wing spot with Crosby not Dupuis. Bennett, Dupuis and Steve Downie will be top contenders to fill two of the three open spots in the top-6.