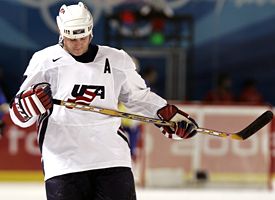 Keith K’Tkachuk and Team U.S.A haven’t had much to celebrate, but that will change today.

Game 1: Sweden (3-2) vs. Switzerland (2-1-2)
Why the Swedes will win: Petr Forseberg has not played a prominent role during the olympics but he will today. Sweden is not the team they could have been but can play a average game and still win this game. Switzerland is a dream story after upset wins against Canada and Czech Republic but their story book ending will end.
-Prediction Sweden 4 – Switzerland 1

Game 2: United States (1-3-1) vs. Finland (5-0)
Why U.S.A will win. What a upset this will be but this is the best possible matchup for the United States. The Americans have lost 3 straight games but finally were able to produce some goals in their 5-4 loss to Russia. That was a big stepping stone for them and expect that spark to carry over to this game. Dipietro will be the key and will have to be on top of his game for the Americans to pull off the upset. Expect a tight game that will go down to the wire.
Prediction upset of the day: U.S.A 4 – Finland 3 in a shootout …

Game 3: Canada (3-2) vs. Russia (4-1)
What a game this is going to be. The Russians are on a roll after winning four straight. Canada on the other hand has loss its confidence and have struggled of late. Think they could use Sidney Crosby?. The key for Canada will be for them to cause turnovers and dictate the play early. If Russia strikes early look out. This game will go back and fourth and could go either way. Expect a wild one.
Prediction-Hardest game to pick because these teams are so talented… Alex Kovalev has been phenomenal during the preliminary rounds and expect him to come up big again Russia 5 – Canada 4

Game 4: Slovakia (5-0) vs. Czech Republic (2-3)]
Czech Republic have not been the team I thought we were going to see. The injury to Dom Hasek has hurt but Tomas Voukon has been a big dissapointment. He is one the NHL’s best goaltenders but we haven’t seen it so far. The Slovaks have been on a roll and it’s hard to see them getting stopped today. For the Czechs to win Jagr will need to step it up. This game is another one hard to pick because i keep expecting the Czech’s to bring their “A” game.
Prediction Czech Republic 4 – Slovakia 2