Rutherford looks to regroup, will expand candidate list next week in coaching search 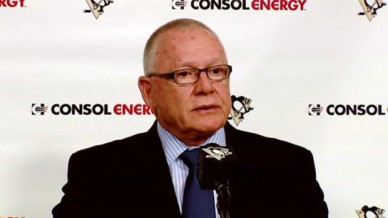 WHERE DO THE PENGUINS GO FROM HERE?
This week Penguins GM Jim Rutherford conducted just three days of interviews before settling on his two finalists; Bill Peters and Willie Desjardins.
The Penguins failed to lure either to Pittsburgh as Peters opted for Carolina and Desjardins turned down a two year deal with a club option from the Penguins on Friday morning as the sides failed to compromise on a number of issues Desjardins had with the job. Among them included Desjardins looking to make Doug Lidster his top assistant coach. Desjardins also sought a four year deal, NHL sources say.
Desjardins is now headed to Vancouver where the two sides are expected to finalize a contract over the weekend.
The Penguins not being a hot destination from coaches is causing a lot of shock from National media members but for those who know what’s really going on, it’s not a surprise candidates with other options are leery about committing to the Penguins.
For the Penguins who have been leaning more towards NHL assistants and AHL coaches than experienced veteran coaches, it’s back to the drawing board. Jim Rutherford headed back home to North Carolina Friday evening for the weekend to regroup as the Penguins coaching search will not resume until Monday or Tuesday. This time around the sense is Rutherford intends to be more patient and get a candidate who really wants to be here.
After moving very quickly this week through the vetting process, maybe too quickly, Rutherford will expand the coaching list, intending to interview at least 2-3 candidates he did not interview during what you can call Part I of the search where the Penguins interviewed eight candidates and ended the interview process on Wednesday. Some will look at that and pause, considering six of the eight candidates they interviewed are still available.
“I’ll work off the same list I had, but it will be expanded by two or three names that for whatever reason weren’t considered for interviews the last time,” Rutherford said via the Tribune-Review. “We need somebody that wants to be here and really wants to win.”
However, some of the six are pulling themselves out of mix, Inside Pittsburgh Sports has learned.
One representative for a coaching candidate who interviewed this week said his client does not intend to pursue the Penguins job anymore, after being informed on Thursday he was out of the mix. The rep does not want the coaches identity public just yet. The individual didn’t coach in the NHL last season if your wondering who it might be.
New York Rangers assistant coach Ulf Samuelsson was not one of the two finalists with Peters and Desjardins but was one of Rutherford’s top three or four considerations. Ideally it would seem that he would move to the top of the Penguins board but that doesn’t appear to be the case, at least not right now.
Samuelsson is preparing to return to the New York Rangers and has told close associates the Pittsburgh situation isn’t the right fit for him right now. After chasing two candidates who were leery about coming here, it remains to be seen if Rutherford will try to sell another candidate on the job who is also on the fence about the situation.
Among the first eight interviews, Rutherford stayed away from candidates he has close ties to and those in the Hurricanes organization, but it’s considered unlikely that will remain the case.
Among coaches who had been discussed internally previously that did not “officially” interview included Kevin Dineen, Jeff Daniels, Mike Keenan and Todd Nelson, team sources say.