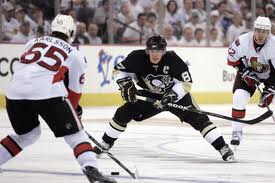 Paul Martin running the power play continues to be a huge difference for the Penguins who have scored a power play goal in six straight games. Martin has become a calming presence and the Penguins puck movement from the triangle on the sides and into the slot to break down the penalty kill has been the difference in the past handful of games with Martin running the point.
“{Paul’s} poised back there, finds open man,” Sidney Crosby said. He keeps it pretty simple.”
James Neal’s power play goal at 13:47 of the second period from 32 ft out was text book Neal who found open space in slot and beat Anderson with time and space. Given Neal that type of time and space from that spot, he’s going to score seven out of ten times. “He’s {James Neal} got a great shot,” Crosby said.” Tough to stop when he’s got time.”
Trying not to sound like a broken record, but what makes Neal such a special goal scorer is how he thinks as a goal scorer. “I’ve often said if you’re going to make a book on a shooter and getting open, just watch {Neal} play,” head coach Dan Bylsma said.
Neal now ranks second in the NHL with 10 goals and first in the NHL with 6 power play goals.
The Penguins top unit tonight featured Martin at the point with Evgeni Malkin, Sidney Crosby, Chris Kunitz and James Neal.
However, on Neal’s power play goal at 13:47 of the second period to tie the game at 2-2, Letang was on the point with under 50 seconds left on the power play opportunity and with the Penguins leading 3-2 mid-way through the third period, Bylsma used Kris Letang and Paul Martin at the point and the Penguins had the puck in the Senators zone nearly the entire two minutes on the power play and Sidney Crosby scored at 11:42 of the period after great puck movement and a setup from Martin in front to give the Penguins a 4-2 lead.
Although the goal officially wasn’t a power play goal, it happened four seconds after Chris Phillips holding penalty ended.
Bylsma said tonight that Letang is the first player off the bench on the power play. “Kris is taking first player off ice, regardless of who comes off,” Bylsma said. “Whether it’s Paul Martin or a forward, Kris is going to take it.”
While also going 4-for-4 on the penalty kill and killing off a 5-on-3, special teams was the clear difference maker in the win for the Penguins, especially considering the lack of top end offensive talent for the Senators.
“We were able to win the special teams battle,” Paul Martin said.
Senators coach Paul MacLean agreed. “Their power play was better than ours and was difference in the game,” MacLean said.
COOKE FALLOUT
Immediately after the game the Senators were furious with Matt Cooke for what some players felt might not have been intentional but was a dangerous way for Cooke to take the body.
“I don’t know why you would hit somebody like that in that situation,” Senators captain Daniel Alfredsson said.
Senators coach Paul MacLean took a subtle swipe at Cooke.
“Happens on a nothing play and we all know who was involved on it,” MacLean said.
Cooke indicated it was a complete accident.
“It’s a complete accident,” Cooke said. “I feel terrible about it. I’m obviously not trying to do that.”
Cooke and his teammates were not surprised to see Chris Neil going after Cooke late in the game.
“At the end of the day you kind of expect it,” Crosby said. “That’s how things work.”
Crosby felt there was no intention from Cooke. “No intention on Cookie’s part to hurt him,” Crosby said.