Sharks, Blackhawks would be tougher Cup Final matchup for Penguins than other top West contenders 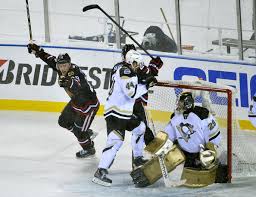 PRE-GAME BUZZ
BLACKHAWKS 42-18-15, 99 pts) @ PENGUINS (47-22-5, 99 pts)
Dan Bylsma last Sunday called the St. Louis Blues the best team in the NHL multiple times. He didn’t go that far with the defending Cup Champion Chicago Blackhawks this morning but feels they are much different than the other top contenders in the West when it comes to style of play.
“Resemble more our team, skill they have, how they play, how they execute with that skill,” Bylsma said of the Blackhawks. “Missing Kane today in their lineup, {but} topline with Hossa in there, certainly have that not only with skill but how they attack, with how they come at you with their speed and through the neutral zone. It is different that the other four, five top Western Conference teams (Blues, Sharks, Ducks, Kings). Still a team you look at as one of the very best,” Bylsma said.
While the Blachawks might resemble the Penguins the most, a more favorable Stanley Cup matchup for the Penguins would be against one of the Blues, Ducks, or Kings, and have the Penguins take their chances in tight low scoring games. That’s an opinion I’ve heard from multiple NHL types.
San Jose and Chicago standout as the two most toughest matchups for the Penguins were they to reach the Cup finals.
San Jose arguably tops the list because of their size, physical play and speed up front. They would be in great position to wear down the Penguins in a seven game series, while the Blackhawks superior depth upfront and puck possession game would give the Penguins problems.
MORE BUZZ
— The Blackhawks and Penguins are both 4-5-1 in their last 10 games.
— The Blackhawks embarrassed the Penguins on March 1 in the outdoor game and that game is still fresh in the Penguins mind. “We still have fresh in our minds, outdoor game in Chicago, them having outplayed us in every facet of that game,” Bylsma said. “So we’re more focused on that than where they’re at in their last couple games.”
— Brandon Saad will appear in his first career game in Pittsburgh. There’s no question the Penguins had a big miss taking Joe Morrow over him in the 2011 entry draft. In fact, Saad was believed to have not been very high on the Penguins draft board at the time. “Lot about his game that’s impressive,” Bylsma said of Saad. “Versatility as a player, speed at which he plays the game…..He can play on any line.”
— Olli Maatta is expected to return to the lineup tonight
— Joe Vitale remains week to week
— Paul Martin will have his latest X-ray later this evening. There was no update as of early afternoon.