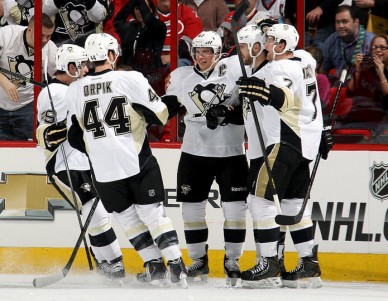 TAKEAWAYS & OBSERVATIONS FROM MONDAY’S 3-1 WIN OVER THE HURRICANES
— Forget the goal and assist rookie Jayson Megna picked up in his second NHL game. What stands out for the 23 year old Megna is how he was a factor on the ice in nearly every shift vs the Hurricanes. You just don’t see that a lot. “He was effective on the ice on almost every shift he was out there,” Penguins head coach Dan Bylsma said. Megna has a good combination of size, speed and skill and what the Penguins like about him is that he’s fast on pucks in the offensive zone and he thinks the game the right way. I never try to over analyze a performance from a low pedigree player (went undrafted) who has played in just two NHL games, but Megna has the look of the type of player who will become a favorite of Dan Bylsma’s in the bottom-6. Megna should get an extended look at the NHL level with Chuck Kobasew out 3-4 weeks and Megna was a good find by Tom Fitzgerald who is said to have been the key figure in scouting Megna at Omaha-Nebraska.
— Hurricanes coach Kirk Muller gave quite the praise towards Sidney Crosby on Monday comparing him to Wayne Gretzky. “He’s similar to Wayne (Gretzky),” Muller said via Tribune-Review. “The focus is pretty high. He seems into every game. He does his preparation work. He just seems so focused. He knows the game and has the skill level to go along with it.” It really is something in how focused Crosby is on a game by game basis compared to other stars like Evgeni Malkin, and Sid sure looked like Gretzky on his setup to Chris Kunitz for the Penguins second goal of the game when Crosby came down the right side with speed and quickly pulled up setting Kunitz up for the goal. That was Gretzky esque.
— Speaking of Crosby. He has 20 points in 12 games, averaging 1.67 points per game. The 150 point talk has been silly and just isn’t realistic, and the focus should be on whether Crosby can top 130 points, something no NHL player has done since Mario Lemieux and Jaromir Jagr did it as teammates in 1995-1996. Even if he plays 80-82 games, with the Olympic year I still think it will be a tough feat for Crosby. Speaks volumes of how the game has changed since the 1990’s and there just aren’t any Lemieux’s out there.
— It’s really amazing that the coaching staff planned to play Dustin Jeffrey over Joe Vitale to start the season, prior to James Neal getting injured. Vitale has been very impressive of late and has really taken his game to another level in creating offense off the rush. Vitale and Tanner Glass have been able to provide those momentum changing shifts for the 4th line which has been a big positive for the Penguins in the bottom-6.
— The Penguins went 4-5 on the penalty kill vs Carolina but are 25th in the NHL on the PK at 77.1%. The struggles at times on the PK should not come as a huge surprise. They lost Matt Cooke to free agency, an excellent penalty killer upfront and scouts regarded Douglas Murray and his big-body presence to clear the front of the net as a factor for the Penguins success on the PK down the stretch and into the playoffs last season. The PK will be tested with Rob Scuderi likely to miss close to eight weeks, if not longer.
— Matt D’Agostini played just 9:38 and 7:57 at even strength. He took two undisciplined penalties and could quickly find his way into Bylsma’s dog house for when Beau Bennett returns to the lineup.